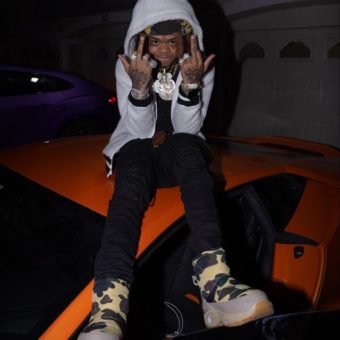 SpotemGottem, is an American rapper best known for his 2020 hit single “Beat Box”, which peaked at number 12 on the Billboard Hot 100. He is signed to Geffen Records, Interscope Records and Rebel Music.

How tall is SpotemGottem? He stands tall with a height of 5 feet and 8 inches and weighs about 63 kilos. He is a fitness freak as well. He has blonde hair and has light brown eyes.

In June 2017, Harden was arrested and charged with grand theft auto and carrying a concealed weapon in Duval County, Florida.

On July 15, 2021, he was arrested for aiming a pistol with a laser sight at a Miami Marriott hotel garage attendant and charged with aggravated assault with a firearm, firearm possession as a convicted felon, and accessory after the fact.

Although he has not revealed any information regarding his dating life, however, there are rumors that he is dating his girlfriend for a long time. Also, rumors are that he is already engaged to his secret girlfriend. However, SpotemGottem has not confirmed about the rumor.

On September 17, 2021, Harden was shot in the hip in a drive-by shooting while driving his car on the I-95 freeway in Miami.