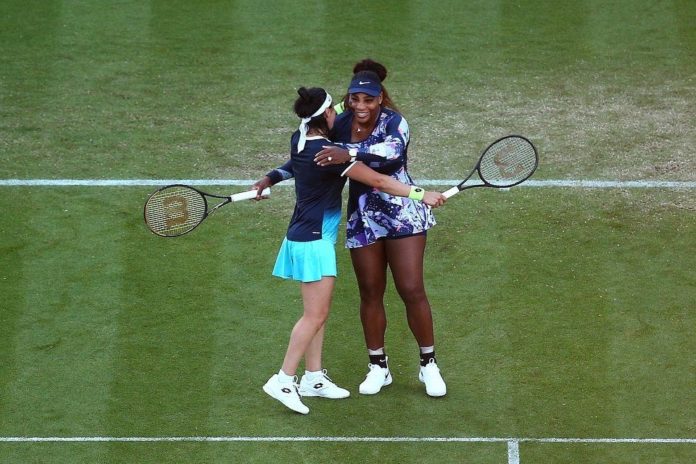 Serena Williams is an American professional tennis player. The Women’s Tennis Association (WTA) ranked her world No. 1 in singles on eight separate occasions between 2002 and 2017. Williams was the world’s highest paid woman athlete in 2016, earning almost $29 million. She reached the No. 1 ranking for the first time on July 8, 2002. On her sixth occasion, she held the ranking for 186 consecutive weeks, tying the record set by Steffi Graf for the most consecutive weeks as world No. 1 by a female tennis player.

During her center court encounter with Harmony Tan this afternoon, Serena Williams has reignited questions among tennis fans. On the right side of her face, the 7-time Wimbledon champion is wearing black tape, and many people are wondering why.

Serena Williams is set to compete against Tan, who is ranked number 113 in the world. After winning the Wimbledon title in 2016, Serena was ranked 411th in the world. She has not appeared in a final since then, but she has competed twice after that. Serena Williams Wearing Tape On Her Face: Why?

Serena Williams Black Tape On Her Face: Why?

According to The Times, Serena is wearing medical tape on her face while playing on the court to assist with her sinus trouble. According to Reuters, the 40-year-old explained how she used to struggle with her sinuses, “I’m a sinus sufferer. When you have sinuses, playing tennis or doing anything else every day is difficult.

The tape is there to help her play at her best possible level free of the constraints caused by her sinus problems. Medical tape is presently employed in a variety of sports to assist athletes with a range of physical impairments including strains and sprains, as well as muscular diseases.

Williams’s 2018 US Open ended in controversy with Williams falling to Naomi Osaka. Moreover, the athletic tape is usually directly applied to the skin and may assist in keeping muscles and bones in certain postures. It’s possible that her mask is enabling her nasal passages to open. Using warm heat, for example, as a nasal saline solution or drinking large quantities of water can also aid in the treatment of sinus issues.

Serena Williams said “To avoid some of the trouble, it’s important not to use so much ice in your beverages. Sometimes that stops you up and makes you get a lot of pressure. “I’ve learned taking hot, hot showers as hot as you can stand it — helps clear those passage ways. And working out helps a lot. That keeps you clear, keeps your chest clear and keeps everything clear.”

Williams was born on September 26, 1981, in Saginaw, Michigan to Oracene Price and Richard Williams. Venus is the youngest of Price’s five daughters: half-sisters Yetunde, Lyndrea, and Isha Price, as well as a full older sister Venus. She also has at least seven paternal half-brothers and sisters. The family relocated to Compton, California, when she was four years old in order for her to play tennis.

Her sister, Venus, was also home-schooled. Her other mentors included Richard Williams of The Venus and Serena Williams Tennis/Tutorial Academy, a Compton resident with the same last name as her father who subsequently founded it.