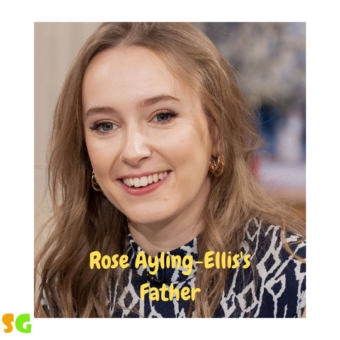 Rose Ayling-Ellis is a British actress. She is a British Sign Language user who has been deaf since birth. She made her acting debut as Frankie Lewis in the BBC soap opera EastEnders (2020–present).

In 2021, she became the first deaf contestant on Strictly Come Dancing, and together with professional Giovanni Pernice, won the nineteenth series. She was given the Visionary Honours for Inspirational Person of the Year in recognition of her achievements. Who Is Rose Ayling-Ellis’s Father: Ted Evans.

Who Is Rose Ayling-Ellis: What We Know

Hannah Ayling-Ellis was born on November 17, 1994, in Hythe, Kent, and grew up in Hythe. She is deaf by birth. She took part in a filming retreat organized by the National Deaf Children’s Society as a youngster.

She met deaf film director Ted Evans at the event who later cast her in his award-winning short film The End. Hannah then applied to Deafinitely Youth Theatre.

Jena Ayling-Ellis made her acting debut in a short film called The End, directed by deaf filmmaker Ted Evans. The 25-minute movie is summarized as follows: “Starting in the 1980s, The End tracks four deaf youngsters over 60 years.”

She has performed in several stage plays, including Mother Courage (Royal Exchange), Faith, Hope and Charity R&D (National Theatre), and Herons Workshop (Lyric Hammersmith). She appeared in Summer of Rockets and Casualty on television.

She can also be seen in the music video for The Vamps’ “Middle of the Night,” as well as a short film with Vilma Jackson called Almost. Since then, Ayling-Ellis has played Frankie Lewis on EastEnders. Charlie Swinbourne, a deaf journalist and scriptwriter, created her character.

In week six, Des and Kate Ayling-Ellis received a perfect score for their tango, which was the program’s earliest “perfect score.”

In episode 8, they danced a Couple’s Choice number that included a stretch of silence as a gesture to the deaf community. Du Beke called it “the greatest thing I’ve ever seen on the show,” earning them TV Moment of the Year for 2021.

Hannah Ayling-Ellis was born on November 17, 1994, in Hythe, Kent. She was born deaf. She took part in a filming weekend organized by the National Deaf Children’s Society when she was a youngster.

During the camp, she met deaf film director Ted Evans, who cast her in his award-winning short film The End after meeting her at the program. She then applied to Deafinitely Youth Theatre.