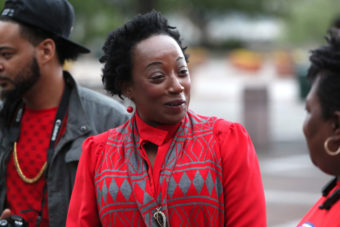 Pamela Moses, the 44-year-old Black Lives Matter organizer who was sentenced to six years in prison for illegally registering to vote in Tennessee, has been accused of cheating the probation office to get her right to vote. Pamela Moses Arrested: Sentenced To 6 Years Illegally Voting.

Memphis was sentenced to six years in prison after being convicted of voting fraud in 2015, when he pleaded guilty to minor charges. “You tricked the probation department into giving you documents saying you were off probation,” Ward said in court, the Washington post stated.

According to the plaintiff, she was unaware that she remained on supervision, which had been in place for seven years, and that her voting rights had been restored in 2019. “I did not falsify anything. All I did was an attempt to get my rights to vote back the way the people at the election commission informed me and the way the clerk did.”

Pamela Moses was accused by Judge Mark Ward of “tricking the probation department” to get the right to vote illegally. “You tricked the probation department into giving you documents saying you were off probation. After you were sentenced to a misdemeanor in the year 2015, you voted 6 times as a sentenced felon.” However, Moses argued that when she pleaded guilty in 2015, no one informed her she did not have the right to vote. On the other hand, Moses said that no one informed her she didn’t have the right to vote when she pled guilty in 2015.

In 2015, Pamela Moses pled guilty to felony charges of destroying evidence and forgery as well as misdemeanour ones of perjury, stalking, theft under $500, and escape.

Pamela Moses was sentenced to seven years of probation for altering evidence and banned from voting in Tennessee as a result of the charge. Moses claims that when she went to vote in 2019, she thought her franchise had been restored.

Bede Anyanwu, her lawyer, said he plans to appeal the sentence. “He thinks the penalty was excessive given the evidence that was presented. Her name should have been removed from the registers in Tennessee at this time, but Memphis officials never received them.

In 2020, Christen was informed that she would not be able to run for mayor of Memphis due to her convictions. Officials subsequently discovered she had never been removed from the voter registration list.” The Washington Post quoted him as saying.