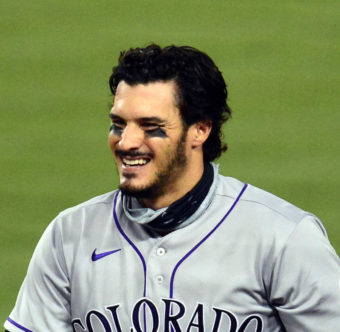 Nolan Arenado is an American Star third baseman who made his MLB debut in 2013 with the Colorado Rockies. He led the National League in home runs and RBI’s in both 2015 and 2016.

Who is Nolan Arenado?

He played shortstop at El Toro High School in California. The Rockies draft him 59th overall in 2009. He was born in Newport Beach, California. Arenado married his high school sweetheart, Laura Kwan, in December 2019.

How tall is Nolan Arenado? He stands tall with a height of 6 feet 2 inches and weighs about 83 kilos. He is a fitness freak as well. He has blonde hair and has light brown eyes.

Some Facts on Nolan Arenado

In the 2021 National League Wild Card Game on Wednesday, former Colorado Rockies third baseman and current St. Louis Cardinals third baseman Nolan Arenado did what he often did in a Rockies uniform in the postseason: come up short at the plate in a postseason loss.

Arenado, 30, has been known to be an absolute beast on both offense and defense in the regular season, especially for the Colorado Rockies when they made the postseason in 2017 and 2018.

St. Louis Cardinals third baseman Nolan Arenado did what he did with the Colorado Rockies: Play well in the regular season and do a 180 in the postseason.

His father, Fernando, is of Cuban nationality, and his mother, Millie, a native of Queens, New York, is of Cuban and Puerto Rican ancestry.

He has an older brother, Fernando Jr., and his younger brother, Jonah, was a corner infielder in the San Francisco Giants organization.

A first cousin, Josh Fuentes, is an infielder who plays for the Rockies.