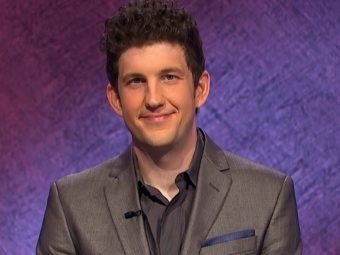 Matt Amodio’s time on Jeopardy! has officially come to a close. He is an American reality TV star who became known after his record-breaking stint on Jeopardy! He had a 38-day run, which concluded with $1,518,601 in winnings. His amodiomatt Twitter account features info on his Jeopardy win, his time on the show, the charities he benefited and upcoming promotional work. He has amassed 40,000 followers.

The Yale University Ph.D. student’s 38 game winning streak came to an end during Monday’s episode of the hit game show.

An actor from Florida named Jonathan Fisher came out on top, finishing by a small margin as he scored $29,200 over statistical research specialist Jessica Stephens, who earned $28,799.

Amodio got stumped over a Final Jeopardy! clue regarding which nation Nazi Germany annexed and divided into regions of The Alps and The Danube before the Allies split it into four sectors. But Fisher and Stephens answered the clue correctly as “What is Austria?”

How tall is Matt Amodio? He stands tall with a height of 5 feet 10 inches and weighs about 73 kilos. He is a fitness freak as well. He has blonde hair and has light brown eyes.

Matt Amodio is a computer science Ph.D. student had the second-longest winning streak in the history of the game show.

On Monday, the reigning “Jeopardy!” contestant Matt Amodio lost his 39th game, leaving Jennings’s No. 1 hall-of-fame spot safe. Amodio, a Ph.D. student in computer science at Yale, had the second-longest streak in the game show’s history, earning him $1.5 million in prize money.

Since his debut on the show on July 21, viewers grew attached to following Amodio’s streak, turning him into the latest “Jeopardy!” darling. Amodio was less aggressive in his wagering compared with James Holzhauer, the professional sports bettor who dominated the show in 2019, but he lasted longer. Amodio, who ranks third in total regular-season winnings, had many more games to go to rival Jennings’s 74 wins.

The episode marked another behind-the-scenes transition for the show. It was the first episode following the departure of Mike Richards, the television executive whose short stint as the new “Jeopardy!” host imploded over offensive comments he had made on a podcast. Richards stepped down as host after taping five episodes, then left his role as executive producer less than two weeks later.

Matt Amodio recently gained a lot of attention after winning a prestigious event. He still didn’t reveal anything about his relationship with his wife or family, which was disappointing.

As soon as he is able to talk about his personal life, he will undoubtedly inform us, but we must be patient for the time being. Matt’s followers are split between those who want to know whether he is married or still single. He also has been active on Twitter since May 2018, accumulating a total of 34k followers, and while he has followed 6 other people.

Matt Amodio has a PhD in Computer Science from Yale University.

Be The Match and Reading is Fundamental were among the charities that benefited from his appearance. His net worth is estimated to be $12 million, as of 2021.

Matt Amodio became the talk of the town after he emerged as one of the top 10 contestants winning prize money from the show.

Although it is quite complex to know his exact worth as per the estimation, his net worth is around $1 million.

He has earned a total of $825,801 in prizes to date, an outstanding number that places him in tenth place on the all-time list of regular-season winners in the sport.

In his sixth game in a row, Matt was victorious.

“Once you win once, that’s just such a great accomplishment,” Amodio stated. “Nobody can ever take that away from you.”

Matt confessed in an interview that he was experiencing two feelings at the same time during the event.

Matt likes plain cheese pizza without any topping on it.

If he gets the chance to time travel then he would like to go to the 1900s, no earlier than that because without technology he couldn’t survive.