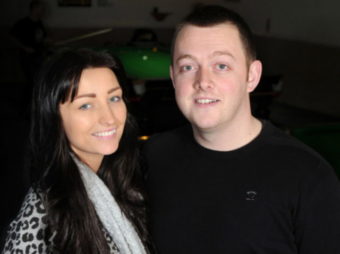 Mark Allen and Kyla McGuigan are reported to have filed for divorce in May 2020. Find out more.

Kyla McGuigan is the wife of Mark Allen, professional snooker from Northern Irish.

Mark Allen and Kyla Mcguigan met in 2011 and got married in 2013 after dating for two years. They had a daughter together in 2017 named Harleigh.

However, after 7 years of togetherness, they decided to go separate ways and filed for divorce in 2020. Mark Allen shared that it would take 2 years to end the divorce proceedings officially.

The snooker player shared about the mental disturbance that he went through when he was separated from his former partner Reanne Evans. Even this time around, he shared how saddening it is but admits that these things happen in life.

However, looking at his statement, it seems he is ready to tackle the problem this time.

Does he have a daughter with Reanne Evans?

Before Mark Allen met Kyla Mcguigan, he was in a relationship with Reanne Evans. Reanne Evans is also professional snooker who also has the title of World Woman Snooker Champion.

Mark and Reanne were in a relationship from 2005 and had a daughter in 2006. However, their relationship was short-lived, and the couple separated in 2008 after 3 years of togetherness. His daughter he had with Reanne Evans, is named Lauren and is 14 years old at present.

Mark Allen is a professional Northern Irish snooker player who has won a triple crown (UK Championship). This year, Mark Allen was seen facing off with his ex-girlfriend in British Open from August 16- August 22. On top of that, Mark Allen has defeated Reanne in the British Open. The news has captured the interest of many audiences and it has become a hot topic in social media like Twitter.

How Much Is Mark Allen’s Net worth?

Mark Allen has won many championship awards and is undoubtedly worth a lot. Wikipedia mentions that his career winnings total £ 3,310,940. His primary income comes from pools and billiards. However, his net worth at present is still unknown.

But, the previous net worth, according to 2019 data estimates that Mark Allen has a total net worth of $100k-$1 million.

There is no information about Allen’s parents or any siblings. However, he has a 14 years old daughter from his ex-girlfriend named Lauren. However, his daughter lives with Reanne.

Mark Allen also has a 3 years old daughter with Kyla Mcguigan named Harleigh. He also has a stepson from Kyla named Robbie Mcguigan, an amateur snooker champion at the age of 17.

And, you can find Kyla McGuigan on Twitter with the username @kylamcguigan