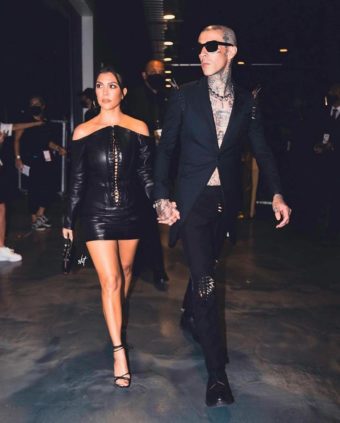 Kourtney Kardashian showed off her massive diamond ring at her engagement party with fiance Travis Barker and their families.

The Blink 182 drummer, 45, popped the question to the Keeping Up With the Kardashians alum, 42, with a proposal on the beach on Sunday.

After just months of dating the reality star, rocker Travis Barker has proposed to Kourtney Kardashian

According to TMZ, Kourtney’s family and friends were there as well while Travis got down on one knee to propose.

Travis walked Kourtney to an elaborate floral decoration on the beach where he ultimately popped the question.

Kourtney agreed to the proposal and secured the moment with a kiss.

How did Travis Barker propose to Kourtney

Travis proposed to Kourtney on the beach in Montecito. He set up a massive floral arrangement, with roses designed in the shape of a heart. There were candles amidst the flowers, and he led Kourtney down the beach to the center of the romantic setting. There, he got down on one knee, as onlookers snapped photos of the special moment. Kourtney took to Instagram afterward to share proposal pics, where Travis is down on one knee.

The 45-year-old walked hand-in-hand with Kourtney as they made their way down to the beach, where he’d set up an extravagant floral arrangement.

After popping the question and presenting Kourt with the engagement ring, she happily said yes and jumped into his arms for a big kiss.

This will be the first marriage for Kourtney. Although the 42-year-old was with her ex, Scott Disick, for nearly ten years, she was never ready to commit to marriage. She and Scott had three kids together, but never got engaged.

Meanwhile, Travis has been married twice — he wed Melissa Kennedy for nine months in 2002, and was with Shanna Moakler from 2004 until 2008, although their relationship was on and off in the years before the divorce was finalized. Travis and Shanna have two children together, and he is still incredible close with his stepdaughter, Atiana de la Hoya, from that relationship.

Kourt and Travis were friends for years before getting romantically involved at the beginning of 2021. Ever since they got together, though, they’ve been madly in love. With Kourtney’s help, Travis even flew on an airplane for the first time since nearly dying in a place crash in 2008.

In fact, the lovebirds had flown back from New York City on the morning of their engagement, as Travis was in town to perform on Saturday Night Live with Young Thug. Congratulations to this happy couple.