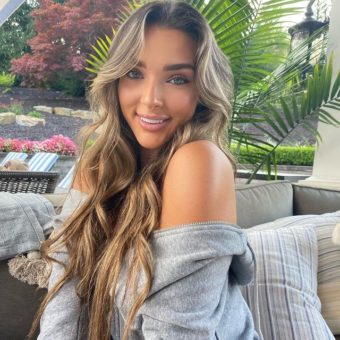 Kendall Vertes is an American dancer who is well known for her dance styles like, Jazz, lyrical, and modern dancer who appeared on the second season of the Lifetime series Dance Moms with her mother Jill. She has also released music videos for original songs on her YouTube channel where she is known as Kendall K.

She eventually re-joined the ALDC elite team in Guess Who’s Back? and remained on the team until Ashlee’s Big Decision Part 1 where she and the other elite dancers decided to leave the ALDC and form The Irreplaceables. Explore more about Kendall Vertes’s Wiki, Bio, Age, Height, Weight, Boyfriend, Body Measurements, Net Worth, Family, Career and many more Facts about her.

Who Is Kendall Vertes?

Kendall Vertes was born on December 9, 2002 in Pittsburgh, PA.

She debuted on the first episode of the second season of Dance Moms. Her net worth is estimated to be $200k – $400k.

She dated John Rink in 2019. She previously dated Austen Swankler. She was romantically linked to TikTok star Caden Woodall.

She has two sisters, Charlotte and Ryleigh. Her father is Erno Valer Vertes.

She began dancing at eighteen months.

Her favorite dance ability are her turns.

With Maria May and Liza Retter, Kendall performed as a member of the singing/dancing music group “The Glitter Girls,” on the television show Party Rockers, at the same time as her first broadcast appearance on Dance Moms.

Kendall’s favorite styles of dance are contemporary and jazz.

Prior to joining the show, Kendall was already dancing at the Abby Lee Dance Company.

Her favorite colors are teal, baby blue and baby pink.

Kendall’s older sister, Ryleigh, was part of the 2017 Lifetime series So Sharp.

She switched to homeschooling in 2014 but later returned to public school in 2017.

She was in the 3rd Grade when she joined the ALDC Elite Competition Team in Season 2 of Dance Moms.