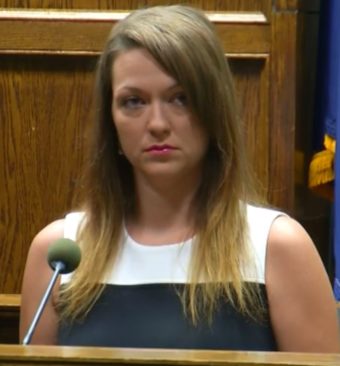 Kala, 31, allegedly suffered the horrendous ordeal of watching her boyfriend murdered, being held captive and being repeatedly raped by Todd Kohlhepp. She was found alive on Saturday after police heard her banging from inside the container where she had been chained.

Officers thought initially there may be two bodies in the shipping container, but they soon realised it was Kala who was making the noises because she identified herself to them.

Kala Brown’s exact date of birth is not known. She is 31 years old, as of 2021. She holds American nationality and belongs to mixed ethnicity.

Kala Brown, who was held in North Carolina, had been with Charles David Carver, 32, when she disappeared on 31 August 2016.

She was only found two months later, chained up “like a dog” in a shipping container.

Brown has since spoken out about her ordeal on the Dr Phil show. Todd Kohlhepp, 45, was arrested on November 3, 2016 after Kala Brown was found chained up inside a metal storage container.

What happened to Kala Brown?

On November 3 police found Kala chained up inside a metal storage container on Kohlhepp’s property.

Kohlhepp has been charged with kidnap in relation to Kala, while police continue to investigate Charles’ death.

Sheriff Chuck Wright said Kohlhepp has since confessed to gunning down four people at a motorcycle shop in Spartanburg County in 2003.

Kohlhepp, 45, has been charged with four counts of murder in connection with the deaths of Brian Lucas, Scott Ponder, Beverly Guy and Chris Sherbert.

Two further bodies have been found on Kohlhepp’s property since his arrest – both having suffered gunshot wounds.

Husband and wife Johnny Joe Coxie, 29, and Meghan Leigh McCraw-Coxie, 26, were both drifters from Spartanburg.

The couple, who were newly married and had a newborn son, had been reported missing on December 22, 2015.

Kohlhepp has not been charged with any offences related to their deaths.