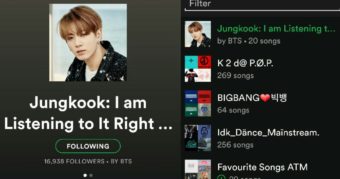 Jungkook is now officially on Spotify, and BTS fans are showering him with praise. Jungkook’s previous solo releases were credited to BTS, so his new Spotify account is a big deal.

We’ll go through everything you need to know, including fan feedback.

Fans were ecstatic when Jungkook announced his arrival on Spotify.

Because the page is just now live, there are no additional songs or monthly listeners. The good news is that Jungkook has promised fans that new material will be released soon. Previously, Jungkook added a note saying “wait a little longer,” suggesting that something will happen in the near future.

Some fans, however, have claimed that the account has been tampered with and items have been deleted. It’s unclear what’s going on with the page right now, but it was previously verified. Keep your eyes open! For the time being, you may enjoy the ‘Jungkook’s favorite songs’ playlist on BTS’s verified Spotify profile.

According to Koreaboo, Jungkook‘s Spotify account was launched the day after it was announced that he would record vocals for BTS’ new Naver Webtoon 7Fates: CHAKHO OST, which Suga is producing.

Fans believe that the new OST and Jungkook’s Spotify debut are related, and that CHAKHO OST may be released sooner than anticipated.

However, there are no current plans for the release of the CHAKHO OST, as of writing.

Jungkook’s solo songs have previously been attributed to BTS, therefore the announcement of an official Spotify account was met with enthusiasm.

One Person wrote: “Gonna flex that I started following Jungkook’s Spotify account from the first day to future armys.”

Other fan tweeted: “if Jungkook has a Spotify account now, it means they can drop the ost or any of his songs at any time…”