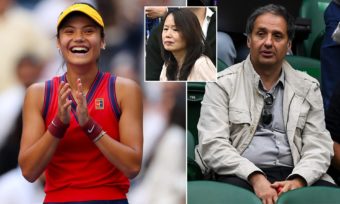 Emma Raducanu, 18, has made tennis history and become the first qualifier to win the US Open while her proud parents were forced to watch from the UK. In an incredible run, just weeks after opening her A Level results, the teen destroyed every opponent in her path.

Raducanu won 10 straight matches to go from qualifier to US Open champion and earn $2.5 million culminating in a straight sets win over Leylah Fernandez of Canada to become Britain’s first female singles Grand Slam champion for 44 years – and she did it all without dropping a set.

Her remarkable rise through the ranks will be confirmed on Monday when she’ll go from number 150 in the world to 23.

It was only her second Grand Slam tournament and came two months after she was forced to retire during her fourth round match at Wimbledon with breathing difficulties.

Who are Emma Raducanu’s parents?

Raducanu was born in Ontario, Canada, on November 13, 2002 to Ian and Renee Raducanu – Romanian and Chinese finance industry professionals.

They relocated to London when their daughter was just two years old.

The family live in Bromley, Greater London, and Raducanu began playing tennis at five, later attending Newstead Wood school, in Orpington, Kent and gaining an A in A-level maths and an A* in economics.

The teen and her dad would hit tennis balls together in the street during the Covid lockdowns.

Raducanu has credited her Chinese and Romanian roots for helping her remain grounded and says her mum’s family are to thank for her drive and discipline.

At the start of the year Emma Raducanu was a remarkably new face on tour. She only made her debut WTA main draw appearance at the Nottingham Open.

Raducanu, ranked 338 in the world at the time by the WTA, then reached the fourth round at SW19 before retiring because of breathing difficulties.

After coming through the qualifying rounds, Raducanu then managed to win the 2021 US Open.

Emma then beat Greek 17th seed Maria Sakkari in the semi-finals before taking on Canadian teenager Leylah Fernandez in the final.

Emma was born in Toronto, Canada, on 3 November 2002. Her father Ian is Romanian and her mother Renee is Chinese. They are both financial executives.

She moved to London at the age of two, and started playing tennis at the Bromley Tennis academy when she was just five.

The tennis sensation was a jack-of-all-trades as a child, dabbling in tennis, ballet, swimming, horse riding, golf, skiing, and even motocross.

However, she found her true calling with tennis and started idolising Li Na, as well as Romanian Simona Halep, from an early age.

Her father Ian is still an important part of her team and will have a say on her coaching situation after the US Open.

However, because of covid restrictions and Emma’s unexpected journey in the tournament, her parents were unable to attend the US Open final to see their daughter’s incredible triumph.