Who Is Colin Powell’s Wife, Alma Powell? How Many Kids Do They Have? 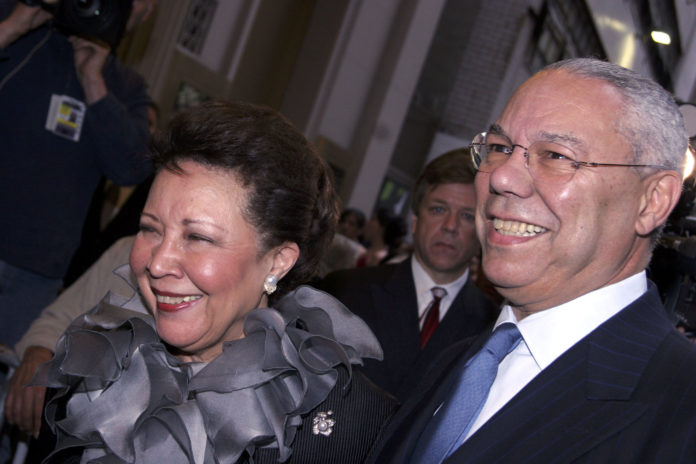 The death of Colin Powell rocked the United States, since he was widely recognized for bringing Democrats and Republicans together over the years. He was the first African-American Secretary of State in the United States, paving the way for other people of color to enter politics in America. Many individuals are wondering who Alma Powell is and who Colin Powell’s kids are now that he’s no longer secretary of state.

Alma Powell, the wife of Colin Powell and his children aren’t often in the news. They posted a loving tribute to him on Facebook after Colin Powell’s death on October 18, 2021. According to CNN, at age 84, Colin died from coronavirus (COVID-19) complications early Monday morning.

“General Colin L. Powell, former U.S. Secretary of State and Chairman of the Joint Chiefs of Staff, passed away this morning due to complications from Covid 19,” the Powell family posted to Facebook. They also noted he was fully vaccinated, and they thanked the medical staff for helping in every way possible. “We have lost a remarkable and loving husband, father, grandfather, and a great American,” the post reads.

Colin Powell suffered from multiple myeloma, which is a form of cancer that starts in the plasma cells. According to reports, he had this type of plasma cell cancer. Who Is Colin Powell’s Wife, Alma Powell? How Many Kids Do They Have?

Who is Colin Powell’s wife, Alma Powell? The couple had been married for 60 years before Colin Powell’s death. Alma Powell is now 83 years old. According to Heavy, Alma Johnson Powell was born on October 27, 1937, in Alabama. She finished high school early and enrolled at Fisk University in Nashville, Tennessee, at the age of 16.

In 1957, she received a B.A. from Fisk University, where she studied speech pathology. After college, he met her in Boston and the two began dating. They fell in love on a blind date at Emerson College in Boston while she was pursuing graduate studies there as a speech pathologist. On Aug. 25, 1962, they married in Birmingham, Alabama — the same year they first met — after being introduced by their parents when they were teenagers (in 1951).

Alma Powell now uses her position to assist youngsters. In 1997, Colin and Alma Powell established the America’s Promise Alliance to support children’s groups. She mentioned how education has had a significant impact on her life, noting that both her grandmother and grandfather received bachelor’s degrees. Alma Powell was also named one of the top 100 black women in America by Ebony magazine and has received a variety of honors for her efforts.

The Women’s Center in Virginia gave Alma Powell the Leadership Award, while Howard University presented her with the Edward A. Bouchet Legacy Award. She was also chosen as an AARP the Magazine Inspire Honoree and Washingtonian Magazine winner for Washingtonian of the Year.

Who are Colin Powell’s 3 children?

What are the names of Powell’s children? Colin and Alma Powell have three children together: Michael, Linda, and Annemarie. According to Heavy, Michael works as a civil servant, Linda is a professional actor, and Annemarie is a television news producer.

Alma Powell, the wife of Colin Powell, may have had a hard time raising their first kid, Michael. According to The Chicago Tribune, Alma and Colin got married four months before Colin was sent to Vietnam.

And when Alma became pregnant with Michael, she lived with her parents. Due to the slow-moving mail at the time, Colin didn’t find out he had a son until three weeks after his birth.

Alma spoke about the problems of being a military spouse. “You must be a strong individual,” she said. You must have a certain degree of adventure and an enormous amount of forbearance.