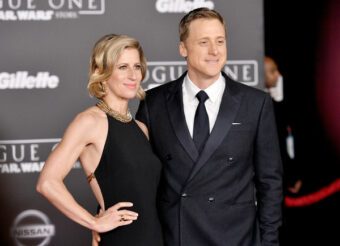 Charissa Barton is the wife of Alan Tudyk, who is an American character actor. He is known for his roles as Tucker McGee in Tucker & Dale vs. Evil, Hoban “Wash” Washburne in the space Western series Firefly and the film Serenity, and Steve the Pirate in Dodgeball: A True Underdog Story. He has also had starring roles in the films I, Robot, A Knight’s Tale, Transformers: Dark of the Moon, 42, Maze Runner: The Scorch Trials, and Rogue One. He performed the voice of King Candy in 2012’s Wreck-It Ralph, for which he won an Annie Award, and has done voices for every Walt Disney Animation Studios film since. Who Is Charissa Barton, Alan Tudyk’s Wife?

Who Is Charissa Barton?

Charissa Barton is a former model and actress who has appeared in several films and television shows throughout her career. Some of her credits include roles on Scandal, Hawaii Five-0, and NCIS: Los Angeles. She is best known as the wife of actor Alan Tudyk. The couple married in 2016 and have one child together.

In addition, Tudyk is best known for his roles in the television series Firefly and Dollhouse, as well as the films Rogue One: A Star Wars Story and Serenity. Barton is a former model and actress who has appeared in several films and television shows herself, including Scandal and Hawaii Five-0.

Barton and Tudyk met while they were both working on the film I, Robot in 2004. Tudyk was cast as Sonny, the robot character in the film, while Barton had a small role as a nurse. Barton and Tudyk got married in September 2016. The couple’s wedding took place at the Costanoa Lodge in Pescadero, California. Couple have one child together named, Ivy Elizabeth, who was born in September 2017. Moreover, Barton and Tudyk currently reside in Los Angeles, California. Tudyk is originally from El Paso, Texas, while Barton was born and raised in Hawaii.

harissa Barton’s husband, Alan Tudyk, made his Broadway debut in Epic Proportions. He was also in Wonder of the World, The Most Fabulous Story Ever Told, Misalliance, Oedipus and Bunny Bunny, in 1999. Tudyk played Dutch Gerhardt, a gay German drug addict, alongside Sandra Bullock and Viggo Mortensen in 28 Days, in 2000.

He first gained attention as a child actor in the movie The Adventures of Huckleberry Finn. He played Wat in A Knight’s Tale (2001), Steve the Pirate in Dodgeball: A True Underdog Story (2004) and the emotional robot Sonny in I, Robot (2005). Serenity is a 2005 film based on the cult television series Firefly by Joss Whedon, which featured him reprising his role as Hoban “Wash” Washburne.