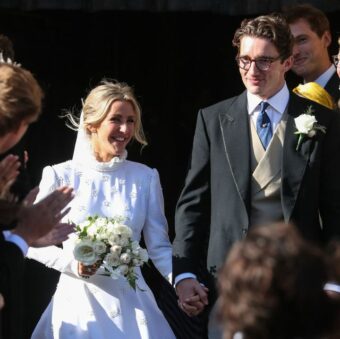 Caspar Jopling is an English art dealer and the husband of British singer-songwriter Ellie Goulding. He is also known as the grandson of former Conservative MP Michael Jopling, who was the Minister of Agriculture, Fisheries and Food from 1983 to 1987. In 2018, he graduated from Harvard University, where he was a member of the varsity rowing team and gained a Bachelor of Arts degree in History of Art and Architecture. Find more about, Caspar Jopling (Ellie Goulding’s Husband) Bio, Height, Wife, Net Worth.

Goulding and her boyfriend Caspar Jopling announced their engagement, on 7 August 2018. The couple were married at York Minster on 31 August 2019 and Goulding was baptised in order to get married. In February 2021, Goulding announced that she and Jopling were expecting their first child. She gave birth in April 2021.

Getting in detail, Caspar Jopling met Goulding in 2017 at a friend’s birthday party. The couple married in Yorkshire, England, in a star-studded ceremony attended by friends and family. The pair now live together in London.