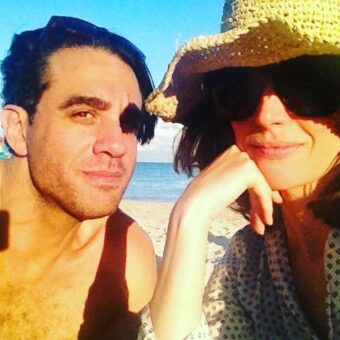 Bobby Cannavale is an American Actor who starred as Bobby Caffey in the first two seasons of the TV series Third Watch and portrayed Gyp Rosetti in the third season of HBO’s Boardwalk Empire. His many film credits include Blue Jasmine, The Station Agent, Spy, Snakes on a Plane, Ant-Man and Daddy’s Home. He has also starred in number in films and movies like, Tom McCarthy’s The Station Agent (2003), Woody Allen’s Blue Jasmine (2013), Paul Feig’s Spy (2015), Marvel’s Ant-Man (2015), I, Tonya (2017), Jumanji: Welcome to the Jungle (2017), Martin Scorsese’s The Irishman (2019), and Sing 2 (2021).

Cannavale was born on May 3, 1970 to Isabel and Salvatore “Sal” Cannavale. His father is of Italian descent and his mother is Cuban. He grew up Catholic in Union City, New Jersey and attended St Michael’s Catholic School. There, he participated in a number of extracurricular activities including being an altar boy and member of the chorus.

When he was 8, Cannavale landed the role of Winthrop, a lisping boy, in his school’s production of The Music Man. He later played a gangster in Guys and Dolls, which solidified his love for acting. When he was thirteen, his parents divorced and then subsequently moved the family to Puerto Rico.

However, after only two years there, they decided to relocate again to Margate, Florida. From 1983-1986 Cannavale attended Coconut Creek High School but got expelled during his senior year for “being a cutup”.

After living with his grandmother in New Jersey to be closer to his acting career goal in New York, he then went to summer school and earned a diploma from Union Hill High School.

Bobby Cannavale tied knot with Jenny in 1994. Couple had a son named Jake together before getting divorced in 2003. In 2012, he began dating actress Rose Byrne. He and Rose welcomed a son named Rocco in 2016. In November 2017, they welcomed their second child together.

The series is based on the truly chilling case of the Watcher House in New Jersey, where residents received threatening letters revealing their most intimate secrets.

Ryan Murphy and co-writer Ian Brennan, of American Horror Story, provide a frightening glimpse into the mind of a stalker. In one scene, husband and wife Brannocks share an intimate moment, not knowing that they’re being watched.