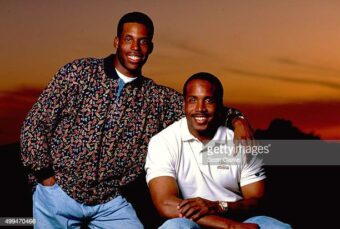 Bobby Bonds Jr is the younger brother of Barry Bonds, who is an American former professional baseball left fielder who played 22 seasons in Major League Baseball (MLB). Bonds was a member of the Pittsburgh Pirates from 1986 to 1992 and the San Francisco Giants from 1993 to 2007.

Moreover, Bobby Bonds Jr.’s birth name is Robert Lee Bonds Jr., who is an American former minor-league baseball player. He is the son of former baseball player Bobby Bonds and the younger brother of Barry Bonds and Ricky Bonds. After high school, he went to Cañada College to play baseball. He was drafted in the 1992 June Amateur Draft.

Bobby Bonds Jr. was born in Riverside, California to Patricia and former major leaguer Bobby Bonds, and grew up in San Carlos and attended Junípero Serra High School in San Mateo, where he excelled in baseball, basketball, and football.

Bobby Bonds Jr. brother, Barry Bonds, garnered a .467 batting average his senior year, and was named prep All-American. The Giants drafted Bonds in the second round of the 1982 MLB draft as a high school senior. Bonds attended Arizona State University, hitting .347 with 45 home runs and 175 runs batted in (RBI).

Bobby Bonds Jr moved up from Rookie League to Short Season A ball during his first year in professional baseball. He moved up to Single A to play with the Waterloo Diamonds, in 1993. Bonds spent the rest of his baseball career (1999–2002) with independent minor league teams.