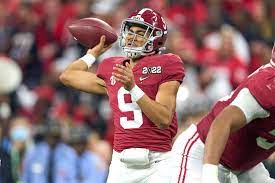 The Alabama Crimson Tide were seeking their eighth national title, and fans were using #RollTide both before and after the game. What does roll tide mean?

Nick Saban is a master of guiding a team to the National Championship and winning the title. He’s accomplished it with the Crimson Tide six times, most recently in 2020. But against Georgia, Saban’s squad was unable to win another title – losing 33-18.

The Bulldogs rallied to take a 34-30 lead in the fourth quarter thanks to Stetson Bennett’s outstanding play, which included two touchdown passes won the game for Georgia. Alabama fans used #RollTide on social media immediately after the game to convey their emotions and thoughts. But what exactly does roll tide mean, and why do Alabama fans use it?

All of the Crimson Tide’s college teams are known as the “Roll Tide.” It isn’t just limited to the football team. Fans of the Alabama Crimson Tide use the phrase as an encouragement for the squad, attempting to inspire them even further to achieve a victory.

The phrase has been registered by the University of Alabama. The usage is not only restricted to sports teams, but it may also be used for other types of enthusiasm. A rallying cry intended as a greeting might be utilized.

Where Does It Come From?

The origins of Roll Tide are unclear, although it is most likely that journalists began utilizing the term in the 1900s. The legend goes that after a game in 1907, the Alabama team left the field covered in mud, which one journalist likened to a “Crimson Tide.”

The two terms were combined to produce “Roll Tide” as the team began to dominate – or roll over – opponents in subsequent years.