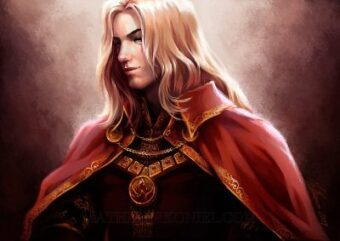 Aegon V Targaryen is best known as one of the strong character of GOT. Aegon is the father of Aerys the Mad King, rather than his grandfather. Moreover, Aegon Targaryen, nicknamed “Egg” in his youth, is one of the two main characters in the Tales of Dunk and Egg novellas. As a child, his father Prince Maekar reluctantly permitted him to serve as squire to the knight errant Ser Duncan the Tall, in the hopes that the lessons learned through humble service and hard experience would help him avoid the excesses and shortcomings of his royal brothers.

Later, he was crowned as King Aegon V when a Great Council bypassed those before him in the line of succession and his older brother Aemon chose to abdicate by joining the Night’s Watch. He was called “Aegon the Unlikely” because as the fourth son of a fourth son, he was placed very low down the line of succession and therefore considered unlikely to inherit the Iron Throne. Who Is Aegon V Targaryen, Mad King’s Father?

Who Is Aegon V Targaryen?

Aegon V Targaryen was the King of the Seven Kingdoms, ruling from 233 AC until his death in 259 AC. He was a gentle and just ruler, beloved by many of his subjects. However, he was not without his critics, who accused him of being too soft on criminals and rebels.

Aegon’s reign was marked by several major events, including the Great Council of 243 AC, where he chose to give up his claim to the Iron Throne in favor of his nephew Daeron II; the Defiance of Duskendale, where he put down a rebellion against House Lannister; and the Tragedy of Summerhall, where Aegon and his heir Prince Duncan were killed in a fire at the Targaryen summer palace.

Aegon’s only surviving child was his daughter Rhaella, who later married her cousin Aerys II Targaryen and became the mother of the “Mad King” Aerys Targaryen and Queen Rhaella Targaryen, the parents of Daenerys Targaryen. Aegon V is also the grandfather of Jon Snow, through his son Jaehaerys.

Read Also: When Will The Owl House Season 2 End: What We Know So Far

During Aegon V’s reign, which lasted for more than twenty-five years, he attempted to advance policies that were more progressive for common people and frequently clashed with noble lords due to his proclivity for imposing unpopular measures. He perished in the ‘Tragedy of Summerhall’, a huge fire at the Targaryen summer castle, along with his son Prince Duncan and close friend Ser Duncan the Tall. His son Jaehaerys inherited the crown after he died. Aerys ruled for 42 years before being murdered by Jaime Lannister during Robert’s Rebellion.

Read Also: Who Is Will Byers In Stranger Things: All About Him