Why is Lil Wayne a Packers fan, after fans spot rapper at Lambeau Field? 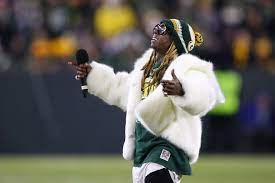 Lil Wayne was seen at Lambeau Field last week, where he watched his beloved team defeat the Detroit Lions. People wondered why Lil Wayne is a Packers fan since he’s from New Orleans, so here’s why. In September, Lil Wayne, a Green Bay Packers enthusiast, came to Lambeau Field to watch their opening home game.

Aaron Jones scored four touchdowns, three on receptions from Aaron Rodgers, as the Green Bay Packers defeated the Detroit Lions 35-17. The rapper is a huge Packers supporter, to the point that he remixed Wiz Khalifa’s Black And Yellow and created Green And Yellow in the year they won Super Bowl XLV.

On January 22, 2022, the Green Bay Packers took on the San Francisco 49ers in the Divisional Round of the NFL Playoffs. Before their matchup with the 49ers on January 22, 2022, Lil Wayne complimented them. Some fans were perplexed as to why Lil Wayne is a Packers fan rather than a Saints supporter who was born and reared in his home city of New Orleans.

Why is Lil Wayne a Packers fan?

Lil Wayne explained why he is a Packers fan on ESPN’s First Take in 2015. Lil Wayne’s father went to the Super Bowl XXXI in New Orleans in 1997 to see the Packers beat the New England Patriots, according to Lil Wayne. Wayne’s father brought home many Packers souvenirs, including cups and towels, after the game.

Will there be a Yellowjackets episode 11? Season 1 episode total explored

He claimed that the well-known NFL video game Madden (1998) was released later that year. He felt compelled to play as Brett Favre and the Packers in the game because of all of the Packers memorabilia in his home. The Saints’ chances never got much of a chance.

Wayne is a regular at Lambeau Field

The artist was at Lambeau Field in January 2021 to watch the Green Bay Packers defeat the Los Angeles Rams in their divisional playoff match.

Wayne tweeted several videos of him enjoying a personal box overlooking the field, including one where he is listening to his song Green And Yellow.