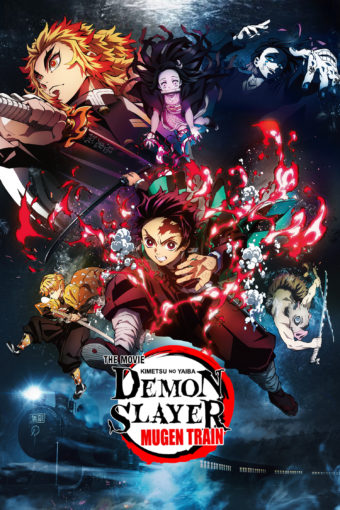 If you’ve been watching Demon Slayer: Kimetsu no Yaiba on Crunchyroll lately, you may have noticed it was just updated. Typically, that means there’s going to be new content added to the episode list, such as dubbed episodes or a new season. But this time is a one-of-a-kind situation: it signals the beginning of Demon Slayer: Mugen Train, the anime’s first movie.

The film is based on the first season of the anime, and you already know what it’s about if you’ve been following it. However, just in case you haven’t been keeping up, Demon Slayer: Mugen Train continues where the first season of the anime leaves off; with Tanjiro, Inosuke, and Zenitsu boarding a train to assist the Demon Slayer Corps in eliminating a strong demon as directed by them.

Here’s a more detailed synopsis, thanks to Crunchyroll

“After completing their rehabilitation program, Tanjiro and his accomplices are deployed to the Mugen Train, where over 40 individuals have vanished. They face the terror aboard the train with one of the most powerful swordsmen in Demon Slayer Corps, Flame Hashira Kyojuro Rengoku.”

The animated film, which premiered in Japan in 2020 and worldwide the following year, is one of the first anime pictures to smash box office records after taking $452,974,619 at the box office during its theatrical run.

But now, the film has been out for months and is now available on DVD, Blu-ray, or your preferred streaming service. And to be honest, if you haven’t seen it yet, you really need to make some time this week to watch it; of course.

When will My Hero Academia season 6: World Heroes Mission release for streaming?

Unfortunately, the film has not yet been added to HBO Max or Netflix, but you can still watch the first season of Demon Slayer: Kimetsu No Yaiba if you’re a subscriber and want to catch up. It’s unclear whether HBO Max or Netflix have any plans to include Demon Slayer Mugen Train, but given how popular the anime is, it’s likely that they’ll at least premiere the second season in early January.