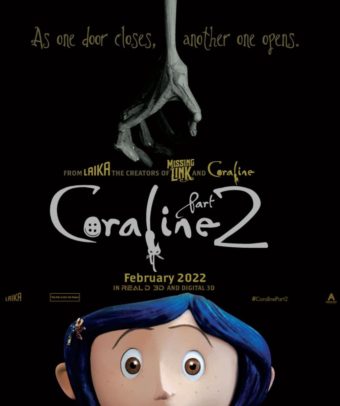 When will Coraline 2 be released? Is the film sequel official confirmation yet forthcoming? Following its premiere in 2009, fans of the film are still looking for a sequel.

With the likes of Watchmen, District 9, Jennifer’s Body, 17 Again, and Avatar being just a few examples, there are numerous 2009 films that fans look back on with fondness.

However, others would strongly defend Coraline as their favorite film of that year.

It was directed by Henry Selick, an American stop-motion animator who combined horror and fantasy thrills with family-friendly fun in order to make a film that many people feel is still unique today.

Sandra Bullock, Dakota Fanning, Teri Hatcher, Jennifer Saunders, Dawn French, Keith David, John Hodgman, Robert Bailey Jr., and Ian McShane are just a few of the celebrities who lent their voices to the project. It has since become somewhat of a cult classic; as is often the case with cult films, there

So, when will Coraline 2 be released? Is there confirmation of a sequel?

There is no release date for Coraline 2 because the project has not been officially greenlit. A sequel, however, isn’t completely out of the question.

You may be wondering why Gaiman’s 2002 novel Coraline was made into a film when there have been no further Coraline novels written by the 60-year-old English author.

As a result, there is no reason to anticipate a Coraline sequel in print or film form until the creator has found an idea he is willing to pursue.

There’s been a resurgence in popularity lately, which is most likely due to fan-made posters being shared on social media sites like Facebook and Twitter. Some have misinterpreted the advertisements as evidence that a sequel has officially been greenlit because of fans of the original sharing them.

Apart from Neil’s position, there are additional reasons for fans not to get too excited. The 2009 film was produced by Laika and was the studio’s first feature, and in 2016, president and CEO Travis Knight ruled out sequels to any of their productions during an interview.

Perhaps he would reconsider if Neil delivered a new book that was ripe for adaptation, right?