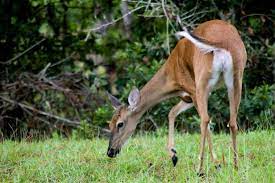 After an eight year wait, Dexter fans were finally reunited with Dexter Morgan (Michael C. Hall). Dexter: New Blood premiered on Nov. 7 and showed people where he’s living now. It involved the remote setting of Iron Lake, New York and a special relationship he had with a deer in the woods. In a recent interview, Hall addressed what the white deer means for Dexter.

Hall was a panelist on the Television Critics Association Zoom panel Dexter – New Blood on Aug. 24, Hall was asked his thoughts by reporters who saw the season premiere before it aired. We now have the chance to show it to viewers. Also, we share the answers of Jennifer Carpenter and Julia Jones, along with those of showrunner Clyde Phillips. Dexter: New Blood airs on Sundays at 9 PM on Showtime

Living in a cabin in the woods as Jim Lindsay, Dexter goes out hunting, but never takes a shot. He chases a white deer and aims his rifle, but never pulls the trigger. Hall expanded on what this routine means to Dexter.

It has been eight years since Dexter left Miami. He seems to be maintaining a productive life in Iron Lake, until Matt Caldwell (Steve M. Robertson) comes to town. Caldwell already tempts Dexter to return to his murdering life by being smug and abusive. Then Dexter learns about the boating accident he caused and got away with. When Matt shoots his deer, there’s nothing stopping Dexter anymore.

ones plays Iron Lake police chief Angela Bishop. Angela is also Dexter’s girlfriend, though she knows him as Jim Lindsay. A new character, Jones looked back at the original series and saw the difference between its protagonist and New Blood.

Carpenter returns as Deb, now replacing Harry as the voice of his Dark Passenger. Carpenter thinks the death of the deer is consistent with his theme.

Phillips returns as showrunner for Dexter: New Blood. He was proud to see his cast articulate the theme of the deer so well.

White stag significance in the show

According to the Department of Environmental Conservation, the white-tailed deer (also known as Odocoileus Virginianus) is New York’s most beloved game animal.

You may be wondering why this drama chose to feature a rare white deer as a topic.

Dexter decided to reframe the killing of the most popular New York game animal, which implied his change in character.

Screen Rant says that the white stag has many symbolic meanings in different cultures.

According to Arthurian legends the white stag is famous for its inexorable ability to escape capture. This is similar to Dexter.

This animal is associated with innocence and purity. It is considered taboo to hunt.

Dexter would be more dangerous if he was seen killing the deer in season 9.