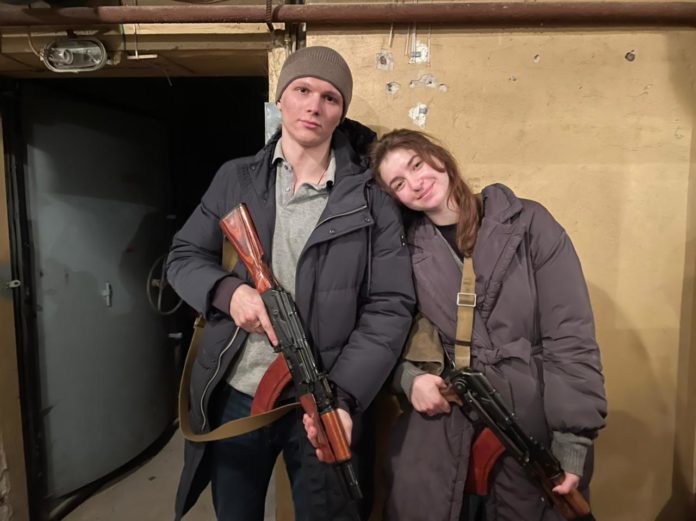 Sviatoslav Fursin, left, and Yaryna Arieva kneel during their wedding ceremony at St. Michael’s cathedral in Kyiv on February 24. They had planned on getting married in May, but rushed to tie the knot due to the attacks by Russian forces. “We maybe can die, and we just wanted to be together before all of that,” Arieva said. Sviatoslav Fursin Aand Yaryna Arieva Marriage: Ukraine Russia Crisis.

It was definitely not the wedding they had planned. They were welcomed into the church by cooing pigeons, but as they walked out man and wife, they were greeted by air-piercing sirens.

The Russian troops were already in their country, the smoke from air strikes was all around them. But Yaryna Arieva and her partner Sviatoslav Fursin had no other option.

“The situation is hard. We are going to fight for our land,” Arieva told CNN, adding, “Maybe we will die, and we just wanted to be together before all of that.”

Speaking about their church wedding in the middle of missile strikes and sirens, Arieva said, “That was very scary. It’s the happiest moment of your life, and you go out, and you hear that.”

On their first day as a married couple, Yaryna Arieva and Sviatoslav Fursin took their guns and prepared to defend Ukraine.

The lovebirds tied the knot just hours after Russia launched its much-criticized invasion of their country.

It was supposed to be a May wedding, but the pair were no longer sure what the future held for them.

Yaryna Arieva and Sviatoslav Fursin, both Ukrainian citizens, married each other less than 12 hours after Russia began its invasion of their nation. They spent their first day as a married couple gathering their weapons and getting ready to defend Ukraine.

The wedding was supposed to be in May, but the couple were unsure of their future plans. Arieva and Fursin have both joined the Territorial Defense Forces, a Ukrainian military unit made up mostly of volunteers.

The pair armed themselves and proceeded to their political party’s headquarters after they were ready.

“Right now, we are here and we are doing everything we can. So there is a lot of work to do, but still, I hope everything will be OK,” Arieva said, adding that some civilians who are not part of the defense force were also given rifles.