The meaning of ‘shibal’: All Of Us Are Dead fans’ new fave Korean curse 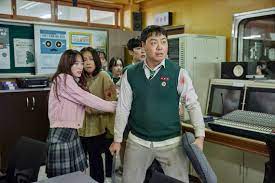 Fans of All Of Us Are Dead have taken a liking to some Korean phrases – but what exactly does the fan-favorite phrase ‘shibal’ mean? Netflix has found greater success in Korean drama following on from the worldwide phenomenon that was Squid Game. Since its premiere in January 2022, All of Us Are Dead has quickly become one of the internet’s most discussed series. It has even been called “Euphoria meets Train to Busan.”

Let’s take a look at some of the most-watched shows on Netflix throughout the world, and see what kind of Korean slang everyone is buzzing about. Let me warn you in advance that these are not polite words… you don’t want your family to hear you say this Korean jargon!

All Of Us Are Dead fans go wild for ‘shibal’

If you’ve been keeping up with the talk about All Of Us Are Dead on Twitter, you’ve probably noticed that some fans have adopted new phrases from the program. The term “shibal,” for example, is frequently employed by characters such as Minji.

Fans have compiled collections of all instances in which Minji utters the word “shibal” throughout the series. As of publication date, one compilation has been liked over 11,000 times on Twitter.

One fan suggested that people make a drinking game out of the number of times the characters utter the word “shibal” on the show. Another called it “the word of the year.”

The word “geoui”, which is also a pejorative term for “coward” or “shimmy shimmy”, was coined by Kim Gyeong-ok. The following are some of the most popular words from the series: “shibaloma,” “gae saekki,” and “ya saekkiya.” Each of these is an extremely insulting Korean profanity.

If you’ve heard any of the characters (ahem Minj) say “shibal” or “ya shibal” on the show, you are hearing them say “f”. It is sometimes used interchangeably with “s”.

Depending on the context used, ‘shibal’ can sometimes mean “f*** you”. Other times, it is just used as a word in response to a situation or to emphasise a sentence, as the curse word is used in English. So, if you’ve heard Minji or any other Hyosan High School students say the term, they’re swearing in Korean.

While some people are relieved to have learnt a few Korean profanities, others are concerned about the excessive usage.

Is it true that the rules for Netflix kdrama/movie are so strict?” “Is it (the) Netflix series’s regulations that allow them to swear so much?” One user asked.

One youngster even said they might have to stop using the term after their parents learn what it truly means. It may be this term is left to the characters at Hyosan High for some individuals!