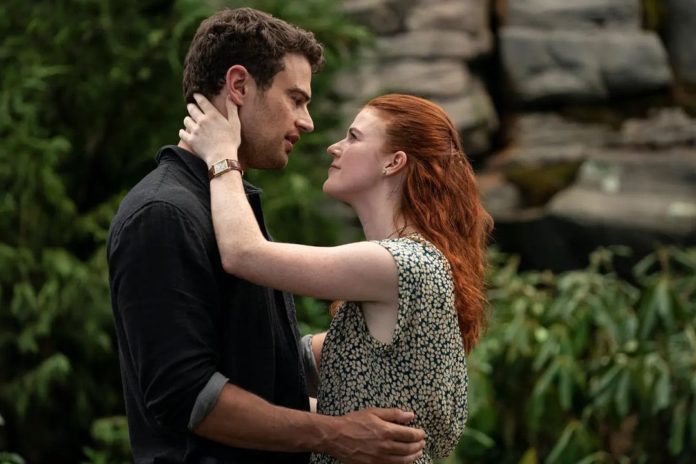 Ruth Kearney is an Irish actress who has acted in numerous television series and movies. She is best recognized for her performances as Jess Parker in Primeval, Daisy in The Following, and London in Flaked, a Netflix series. Kearney was born in London, England to Irish parents before relocating to Dublin, Ireland at five years old. She was born and raised in a tiny community on the coast at Monkstown, just outside of Dublin City.

She went to St Andrew’s College, Booterstown and then Trinity College, Dublin, where she earned honors degrees in Drama and Classics before studying at the Bristol Old Vic Theatre School for training. Her performing career began with roles in plays like Man of Mode alongside Antonia Thomas and Theo James , On the Razzle, Three Sisters, Oh! What a lovely War!, and Othello. Meet Ruth Kearney, How It Ends Actor Theo James’s Wife.

How old is Ruth Kearney? She was born on born 11 November 1984 in London, England. She is 37 years old, as of 2022. She holds British nationality and belongs to mixed ethnicity.

Kearney is best recognized for her starring role as Jess Parker in the sci-fi series Primeval, which she joined the cast of in 2011 and appeared in both Series 4 and Series 5 of the show. In 2014, she played Katharina in FX’s political thriller Tyrant, a guest appearance. In 2015, Kearney took on the recurring part of Daisy Locke in the third season of Fox’s American psychological thriller series The Following.

In the Netflix original comedy series Flaked, she plays London, the female lead. London is a young woman from New York who moves to Los Angeles and starts working as an assistant for Arnett’s character, Chip. Kearney portrays an attractive newcomer to Venice caught in a love triangle with Will Arnett’s characters and David Sullivan’s character.

It is Kearney’s first major comedy television series. The show debuted on March 11, 2016, with all eight episodes available at once. Flaked returned for a second abbreviated season in 2017. ePIX debuted BoJack Horseman’s Get Shorty during its first season, with Becca Morgan played by Ruth Kearney.

Kearney is married to British actor, film and TV producer and director, Theo James who she has been in a relationship with since 2009. They met at the Bristol Old Vic Theatre School. They married in Islington Town Hall on 25 August 2018. The couple have one daughter, born in 2015.