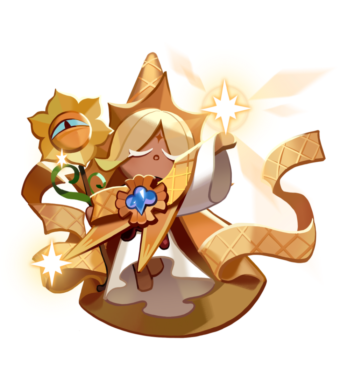 The Cookie Run: Kingdom is an action RPG in which the player takes on the role of Ginger Brave Cookie, the protagonist. It features a party-based system that allows you to create a group of cookies and unlock them throughout the game. There are a number of cookies to discover throughout the narrative and via the classic gacha system. Players may also receive a lot of free stuff that can be obtained with in-game keys.

Vanilla Cookie repairs the Party’s Hit Points, providing a protective barrier that absorbs a proportionate amount of damage. His ability has a 19-second cooldown. It’s an Ancient-rarity healing cookie. By default, his position is prioritized in the rear. Pure Vanilla Cookie was formerly the Emperor of the Vanilla Kingdom.

Cookie Run’s Pure Vanilla Cookie is an excellent addition to any collection. It’s also the first playable Ancient Cookie in the game, and he comes with a fantastic healing ability: Love and Peace, which restores his allies’ ATK to 99.4 percent of its maximum capacity.

His skill has a 19-second cooldown which is pretty good for such a good healing skill. It is best suited with 5x Solid Almonds and 5x Swift Chocolate. The Solid Almonds have a better damage resistance than the Soft or Medium Almonds, while The Swift Chocolate has a faster recovery time.