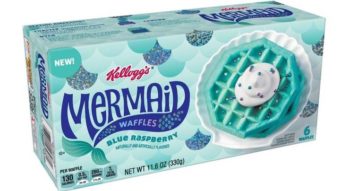 Every day, new internet memes are created, but it’s the old ones that stay amusing for years. In 2020, Kellogg’s launched Mermaid Waffles, a unique kid’s meal product.

They had no idea that the delicious treat would become the next viral internet meme. The amusing Mermaid Waffles Meme has resurfaced in 2022. Continue reading to learn more about it.

In August 2020, Kellogg’s introduced Mermaid Waffles in the United States. The blue circular waffles were designed to entice youngsters from all across the country.

Following the trend of rainbow foods, two additional varieties were released by Kellogg’s: Unicorn Waffles and Birthday Cake Waffles. However, it was the Mermaid-themed snack that drew attention for all the wrong reasons.

The Product Became A Viral Meme

The next day, the internet was flooded with memes as soon as the new product was announced. That’s because people compared Mermaid Waffles to the popular Blue Waffle Meme, which had dominated the internet since 2006.

The meme requested that people search for the phrase “blue waffle” on Google, which would bring up a graphic of some woman’s genitals. It was one of the most famous pranks of the noughties and swept schools and businesses all around the world.

When the new Kellogg’s breakfast product was announced, net users were enraged. They thought that if people entered “blue waffle” into their browser, they would be sent to a page advertising the product. Instead, though, they were taken to something far more disturbing.

In 2022, the two-year-old meme will be revived. It all began on January 25th, when a Twitter user posted a screengrab of the previous year’s viral meme. The meme was a photo of the Mermaid Waffles with the caption “STOP KELLOGG YOU DON’T KNOW WHAT YOU’RE DOING.”

Around the same time, it received a staggering 134,000 likes, which led to the viral Mermaid Waffles Meme. The 2022 Twitter user wrote: “Kellogs knows exactly what they’re doing. “Include a photo and caption with your images such that people can tell what’s going on in them.”

The tweet has revived interest in the amusing product and reignited people’s amusement.