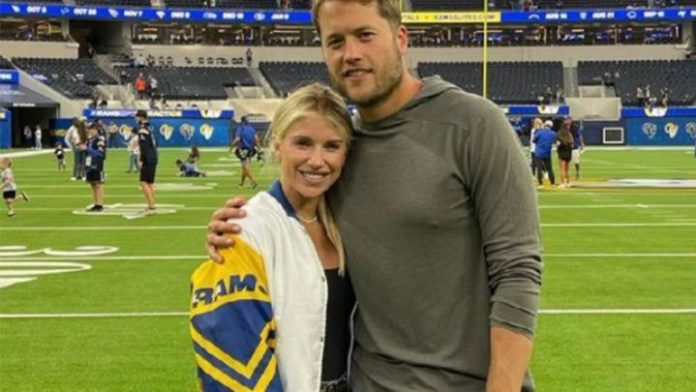 The Los Angeles Rams play the Cincinnati Bengals at SoFi Stadium on Sunday in Super Bowl LVI. Here’s what we know about Matthew Stafford’s parents ahead of the game. On Sunday, the attention of the entire football world will be on quarterback Matthew Stafford as he attempts to become the Rams’ first Super Bowl champion since 1999.

Stafford was acquired by the Rams in 2021 after being Detroit’s primary starter from 2009 to 2020. This season, Stafford completed 4,886 passes for 41 touchdowns and 17 interceptions while leading the Rams to a 12-5 record. Matthew Stafford’s Parents: Super Bowl LVI.

Stafford was born on February 7, 1988, in Tampa, Florida. He grew up in Dunwoody with his father, who attended graduate school at the University of Georgia as a youngster. The family subsequently relocated to Dallas, where Stafford went to Highland Park High School.

Matthew’s spectacular football career began at Woodberry Forest School in Virginia, where he was the top high-schooler and best college prospect.

While there, he established himself as the finest high-school quarterback in the country and graduated early to enroll at the University of Georgia. Matthew was chosen first overall by the Lions in the 2009 NFL Draft after his brilliant football performance at Georgia.

John and Margaret Stafford are the parents of Matthew Stafford, who have been extremely encouraging to their son’s football career. Matthew’s mother, Margaret, recently addressed Fox News where she discussed her son as a youngster and how much winning the Super Bowl would mean to him.

She recalled Matthew’s childhood, remarking, I’m not a superhero. I don’t have any superpowers: “He loved having a ball, always had to have a ball. No Lego in our house.” When asked if she ever thought Matthew would make it to the Super Bowl, she said: “Yes. Well, I think, along the way, people would say, ‘When did you know?’ But, he was always talented, surrounded by a bunch of fun friends that love sports, so it wasn’t like a stand-out. He just loved doing it.”

“This year is going so far, I’m hoping and praying for a victory.” Margaret added.

Stafford’s father was a good swimmer, which may have provided Stafford with his athletic ability.

He stated, “I believe one thing I’ve passed on to Matthew is the value of work ethic, the ability to apply your best effort every day and not get ahead of yourself by focusing on game day. Another is that you should not be carried away by good times or depressed by bad ones.” Keep level and you’ll do your best.”