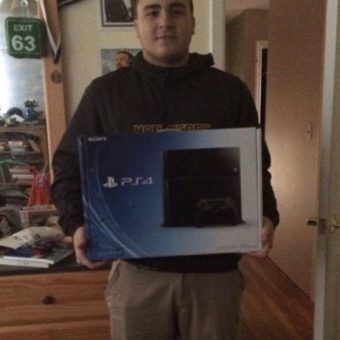 Louis, better known on social media as LosPollosTV, is a Twitch streamer and professional NBA2K player who specializes in MyTeam pack openings and gameplay. Louis began his social media career in 2015 and has since built a following for his NBA 2K, Fortnite, Uno, and Call of Duty gaming and live streams. Louis joined the 2Hype-focused digital community team as part of the 2Hype family. He then signed with Luminosity Gaming as a content provider.

How tall is LosPollosTV? He stands tall with a height of 5 feet and 8 inches and weighs about 63 kilos. He is a fitness freak as well. He has blonde hair and has light brown eyes.

LosPollosTV’s started his social media career in 2015. He has become well-known for playing NBA 2K, Fortnite, Uno and Call of Duty on livestreams. His net worth is estimated to be $3 million.

LosPollosTV, also known as Louis Sammartino, was born on February 8, 1995, in the United States. His early life and upbringing are largely a mystery.

Louis joined the NBA 2K-focused online community known as 2Hype. He became a content creator for Luminosity Gaming after that.

In May 2020, Louis’ LosPollosTV account was banned from Twitch for an unspecified amount of time. The reasons for the ban remain unclear. Some fans have speculated that the ban was related to the movie night where he streamed the movie “SuperSize Me,” where a prostate exam was briefly shown on screen. Fans have criticized Twitch for banning him and say his punishment does not fit the crime.

Louis has already been banned for several days at a time on two occasions in the past. He was banned for a few hours last February 2020, his most recent ban before May 2020.

In 2020, LosPollosTV became a smash hit when he set the world record for the longest-ever live broadcast, streaming for 195 hours straight. The stream began on March 29, when he vowed to continue his broadcast for two more minutes every time someone subscribed to his channel.