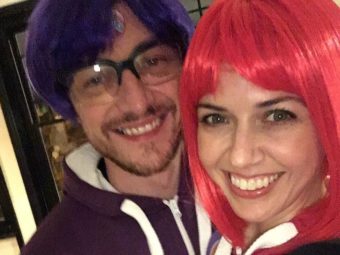 The Scottish actor has acknowledged that he married his American partner, Lisa Liberati, in secret. The report had claimed that the star had married his personal assistant in 2019, but until now he had avoided confirming whether they were true.

In a new interview with The Guardian, writer Arifa Akbar claimed that after meeting on the set of Split, “they began a relationship several years later and he confirms they are now married.”

As Liberati is from Philadelphia, McAvoy was asked if he is now an honorary Philadelphian, to which he replied: “Yeah, it’s like a second home for me.”

He was previously married to English actress Anne-Marie Duff for 10 years between 2006 and 2016, during which time he fathered an 11-year- old son named Brendan McAvoy. The former couple released a joint statement in 2016 announcing their divorce.

Two years later, in an interview with The Times, Anne-Marie addressed the split saying: “Divorce is a profound, difficult experience. It just is. It’s a bit like you go to bed and you wake up holding hands in a hurricane. And nobody gave you any storm warnings.”

“And if you are recognisable, you can’t leave the hurricane at home, because you walk down the street and everyone knows you are holding hands with the hurricane.”

Lisa And James Were Rumoured To Be Married In 2019

James and Lisa met while filming Mr Shyamalan’s 2016 film Split. However, it was only two years later, in 2018, that they began dating.

It was reported in 2019 that the two had already married, but James neither confirmed nor denied it at the time. The pair reportedly relocated to a home in London during the lockdown in July 2020.

McAvoy, 42, met the Liberati on the set of M Night Shyamalan’s thriller Split (Liberati was Shyamalan’s PA). McAvoy played the lead role in the film, a psychological horror about a man with 24 different personalities who kidnaps and imprisons three teenage girls. During filming, McAvoy was in the process of separating from actor Anne-Marie Duff after 11 years of marriage.

Two months after the divorce was finalised, McAvoy and Liberati made their relationship official on Instagram.

Rumours that the pair had got married began after director Jamie Lloyd, who is a close friend of the McAvoy’s, was overheard referring to Liberati as the actor’s wife.