Where to watch Licorice Pizza: Is the movie streaming? 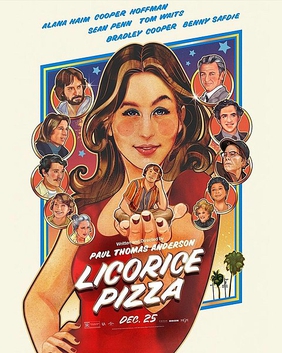 Licorice Pizza is the name of Paul Thomas Anderson’s new coming-of-age film, which will be released in theaters. Fans are anticipating the release of Licorice Pizza, which features Alana Haim, Cooper Hoffman, and Bradley Cooper. They want to know where they can see Licorice Pizza and if it’s available to watch online first.

This nostalgia-tinged film follows the lives of Alana Kane and Gary Valentine, who grow up in 1973 in San Fernando Valley and go on their first romantic encounters, relationships, and life experiences. So, where can you watch Licorice Pizza and whether it’s available to stream or see in the theaters?

Is Licorice Pizza streaming or in theatres?

Only in theatres can you watch Licorice Pizza. As of yet, you won’t be able to view Licorice Pizza on any streaming service. There have been no announcements regarding when and whether the film will be made available to stream sites as a result of its extended theatrical run. Because it is a micro-budget production, it’s more likely to be viewed quickly rather than later, perhaps as early as February.

Where to watch Licorice Pizza

The movie is now available to see in cinemas. However, be sure to verify the locations near you to ensure that Licorice Pizza is playing at a theater.

That’s because the number of screens showing the film has been reduced significantly. It was originally planned to be shown in approximately 2,000 theaters, but it has since been pushed down to 800 locations.

On 26 November, Licorice Pizza was released in a limited theatrical run and then expanded to a national release on 25 December. MGM’s The Lion King became available for streaming following its theatre debut, which might be good news for fans desiring to view it after the end of its theater run.

Amazon recently purchased MGM for $8.45 billion, indicating that the film will most likely become accessible through Prime 45 days after its theatrical run concludes.

The 1970s are another favorite era for Anderson, as it was when he was born and grew up. His work is clearly influenced by the film techniques of the 1970s, particularly by Martin Scorsese, who has a clear impact on his movies.

This is evident in one of the film’s most tense moments, the moving truck scene, which follows Gary’s destruction of John Peters’ sports vehicle. His automobile has run out of petrol and, when Alana realises her moving truck has as well, she takes desperate measures.

It means going downhill backwards and getting more petrol in the pitch dark. With the audience on tenterhooks wondering if she will make it to the bottom safely.