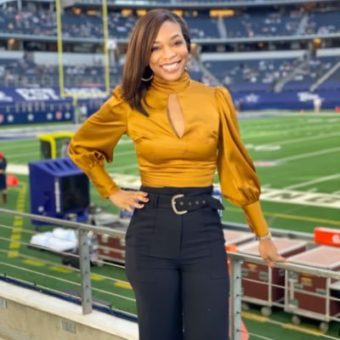 Kristina Pink, a reporter for SportsNet LA, fainted during an interview with Amir Coffey following the previous Clippers vs Hawks game. She then gave an explanation as to what occurred after falling over on-court.

Kristina Pink is a FOX Sports NFL reporter who works with Joe Buck, Troy Aikman, Mike Pereira, and Erin Andrews. She also courtside reports for the Los Angeles Clippers on Prime Ticket and was recently in attendance at the team’s game against the Atlanta Hawks. Kristina Pink, on the other hand, fell over during a postgame interview on the court, in what was a rather unpleasant-looking scene. She subsequently specified on Twitter how it occurred and provided fans an update.

Kristina Pink fall over while talking to Amir Coffey

When she was speaking with Amir Coffey after he dropped 21 points in the Clippers’ 106-93 victory over the Atlanta Hawks, she fell. Kristina Pink took a hard fall and remained down for a short time at the end of the interview.

Kristina Pink explains how she fell, provides update on her condition

After the contest, Pink described how she fell and informed her fans that she was doing well. “For everyone asking,” she tweeted, “I’m fine. There was water on the court… Thank you all for your concern.”

Because Reggie Jackson and Terence Mann had drenched Amir Coffey’s performance with a bucket of water, the court was apparently moist. This wasn’t noticed by the floor cleaners, leaving a puddle of water around Pink that caused her to slip.

It was a hard fall, and the NBA may want to caution players against pouring water on one another in the future, at least until sideline reporters are out of the way. Pink’s fans were relieved that she was OK, and they wished her the best.

The Clippers’ victory over the Lakers will make Pink ecstatic. Despite the fact that Kawhi Leonard and Paul George are missing, the Clippers continue to win games and remain competitive.

They currently rank ninth in the Western Conference standings and are still in contention for a postseason berth.