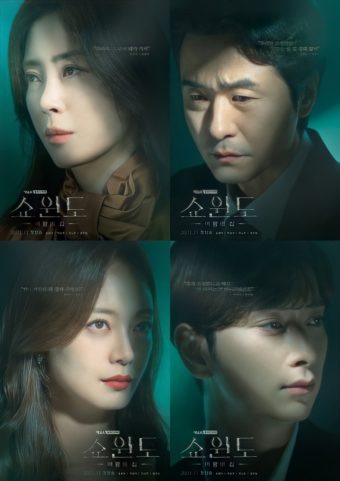 An intriguing yet sensual Kdrama has now arrived to enchant and capture the attention of Kdrama fans. Show Window: The Queen’s House is a mysterious yet seductive drama that will entrance and captivate you. But isn’t it true what we all adore?

The not-so-perfect life of Han Sun Ju (Yoon Ah), who supports another lady in an affair without comprehending that the relationship is with her own spouse, will be the subject of the new Channel A and Viki drama. What will happen when she discovers the whole truth? Will her reign as queen of the ideal family come to an end? Earlier, with dramas like “The World of The Married” and “Cheat On Me, If You Can,” audiences have seen the ugly side of not-so-perfect “Kdrama” pairings.

As a result, Show Window: The Queen’s House will be another example of a show that breaks the preconceived notion that all Kdrama enthusiasts have.

The Queen’s House is a relatively new addition to the Kdrama world, having debuted on November 29, 2021. The narrative follows a woman who assists another woman in her affair without knowing that the other individual involved is her own husband.

The first season of the drama has just launched. The backstabbing, cheating, and betrayal have all begun to unfold. Even if you don’t live in South Korea, you can watch it all on line.

In episode 1, we see Han Sun Ju receiving love and attention from her husband, Shin Myeong Seob (Sung Jae), as they attend a fashion event. Yoon Mi Ra(So-Min), however, is also at the party with a dejected appearance. It will be interesting to see how she interacts with Sun Ju in the future episodes.

The younger sibling of Sun Ju (played by 2PM’s ChanSung) is named Byeong Jae. He had a relationship failure in “So I Married An Anti Fan,” and we hope his character finds love in Show Window.

Show Window: The Queen’s House is now available on Rakuten Viki, allowing people from all corners of the globe to watch new episodes. Furthermore, Viki is a legal distributor of the series. As a result, you may watch the series for free, and it will not cost you a thing. Subtitles in English and other languages are also available to enhance your viewing experience. Meanwhile, in South Korea, the drama is broadcast on Channel A cable television network.

Without the cast, a drama is nothing. The cast provides life to the characters and structure to the story by functioning as the project’s backbone. With their unusual, mischievous, and compelling new personalities, the Show Window: The Queen’s House main cast has begun to show off their talent. But do you know much about them?

Song Yoon Ah is the first queen to be introduced, as she’s playing the ‘apparent’ queen of the drama, Han Sun Ju. She portrays a woman who has it all but whose world will soon fall apart before her very eyes.

Furthermore, we can’t anticipate what will happen to Han Su Ju or the future of her life. Yoon-Ah is, without a doubt, proud of her new project, as she explained that Show Window: The Queen’s House is precisely what she was searching for.

Sung Jae Lee portrays Shin Myeong Seob, Han Sun Ju’s spouse, in a secret love affair. He chose to be a dedicated father and husband until he met Yoon Mi Ra, whom he meets at the start of the series. The two try to conceal their affair from the rest of the world after getting involved. Sung Jae is cheating on Yoon-ah in reel life, yet he is eager to collaborate with her for a second time. When he learned that Yoon-ah was also participating, the actor said that he wanted to do it immediately.

So-Min, on the other hand, wants to surprise her fans with a new side. She said that the part would allow her to broaden her acting range.

Finally, Chan Sung of 2PM plays Han Jung Won, the brother of Myeong Seob from “My Fair Lady,” who would do anything for his sister. So, what will happen when he finds out about Myeong Seob’s infidelity? We anticipate that he will try to make things better for her. However, Chan Sung has expressed his affection for Yoon-ah and desire to be her real-life younger brother.

The cast of The Queen’s House has a wonderful chemistry and balance. The same will be shown on the screen.