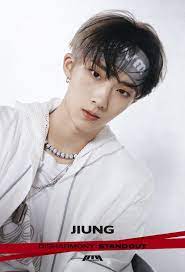 Jiung (지웅) is a South Korean singer and rapper under FNC Entertainment. He is a member of the boy group P1Harmony. Explore more about Jiung’s Wiki, Bio, Age, Height, Weight, GF, Dating, Affair, Net Worth, Family, Career and many more Facts about him.

Jiung was born on October 7, 2001, in Seoul, South Korea to a banker and a National Tax Service employee. He also has a younger brother.

How tall is Jiung? He stands tall with a height of 5 feet and 8 inches and weighs about 62 kilos. He is a fitness freak as well. He has blonde hair and has light brown eyes.

Jiung joined FNC Entertainment in 2017, and trained for 3 years before debut.

In 2019, Jiung, his fellow P1Harmony members, some FNC artists and employees traveled to Mongolia as part of FNC Entertainment’s charity program on the “LOVE FNC 5th Volunteer Team.”

Jiung decided to pursue a career in music after performing at a festival when he was a child.

He was the third member of the group to be announced. His net worth is estimated to be $100k.

On September 3, 2020, Jiung was introduced as the third member of P1Harmony.