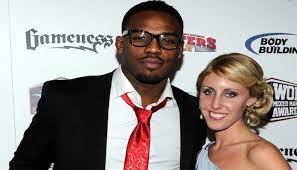 Jessie Jones is best known as the fiancée of Jon Jones. He is an American professional mixed martial artist currently signed to the Ultimate Fighting Championship (UFC), where he has competed in the light heavyweight division. Jones claimed that he was sexually assaulted as a child. In addition, Jones is a Christian.

Jessie Jones stands tall at an approximate height of 5 feet 6 inches or 164 cms and has a bodyweight of around 78 kgs or 171 lbs. Besides this, her chest-waist-hip measures are 36-26-37 inches respectively. Moreover, this popular personality has auburn hair and hazel green eyes.

Jessie Jones is soon married to be her husband named, Jon Jones. Jones and his fiancée Jessie have three daughters: Leah, born in 2008; Carmen Nicole Jones, born in 2009; and Olivia Haven born in 2013.

In an interview with Joe Rogan on December 1, 2016, Jones stated that he has four daughters (aged 9, 8, 6 and 3), indicating a daughter born before Leah.