Is There More Grass Or Hair In The World: Forget Wheels Or Doors 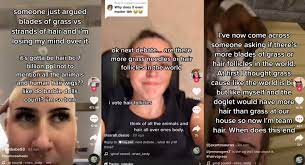 Forget about doors or wheels. A new argument is sweeping social media, and it might be even more strange. This week, people all around the world were arguing over the same odd question: Is there more door or wheel in the world?

A Twitter user posed the inquiry, which went viral, and the debate then grew heated on TikTok as people became divided and could not reach an agreement. Now there’s a fresh argument pitting people against one another on the internet. Here we go again… Is There More Grass Or Hair In The World: Forget Wheels Or Doors.

A new question has emerged from the viral wheels or doors debate: Is there more grass or hair in the world? Internet users are arguing whether there are more blades of grass or hair follicles in the globe, and it’s generating a lot of commotion.

It’s a question you’ve probably never considered in your life, and the answer is impossible to determine, which is what makes it so fascinating.

Thankfully, this one is simpler than wheels or doors because there’s no argument about what constitutes a wheel and a door. On TikTok, people are bickering about the solution, although there appears to be a clear winner.

Read Also: What Meghan Markle and Prince Harry has said about the Ukraine crisis

With one individual stating, most people are convinced that the solution must be hair: “At first I thought grass ’cause like the world is big but myself and the dog would have more hair than grass at our house so now I’m team hair. When does this end?”

“Ok next debate… are there more grass needles or hair follicles in the world? I vote hair follicles. Think of all the animals and hair all over one’s body,” said another.

A third person added: “Someone just argued blades of grass vs strands of hair and I’m losing my mind over it. It’s gotta be hair bc 7 billion people not to mention all the animals and human hair wigs? Like do barbie dolls count?”

With 7.7 billion people in the world (who almost all have hair) and green spaces disappearing at a rapid rate due to urbanisation, the logical answer certainly does seem to be hair – but we’ll never know for sure!