Is The Woman in the House a limited series? 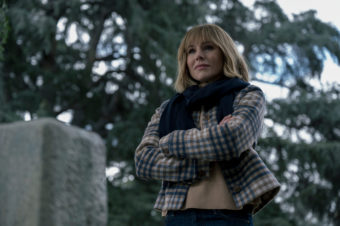 Kristen Bell stars in Netflix’s newest original series The Woman in the House Across the Street from the Window, playing Anna, a lonely woman still coping with a terrible loss by spending every day the same way: sitting with a glass of wine, looking out the window.

There isn’t much to see on a daily basis, but when a charming new neighbor and his daughter move in across the street, everything changes. Suddenly, Anna begins to view the light at the end of the tunnel… until she witnesses the grisly murder of a woman — you guessed it — in the home next door.

Anna’s life is turned upside down when she tries to discover answers, and it doesn’t take long for her to get them. In fact, the series’ pacing is excellent, which begs the question: will this be a multi-season Netflix series or a limited series with a self-contained narrative?

Is The Woman in the House Across the Street from the Girl in the Window a limited series?

Yes, Netflix is calling the Woman in the House Across from the Girl in the Window a limited series. So what exactly does this imply?

When a limited series has returned for additional seasons on Netflix, the streaming service has typically introduced a new story with either a new or returning cast.

Will there be a second season of The Woman in the House?

The show’s creators have not yet announced whether or not they will renew the series for a second season, but it appears that they do have plans to continue the story beyond one season.

The season 1 ending of The Woman in the House Across the Street from the Girl in the Window set up a second season by revealing a new mystery in the last seconds of the episode, which isn’t going into too many specifics to avoid any major spoilers about how the season ends.

Given the way things concluded in the season, it appears very likely that Netflix will order another round of episodes. If a second season is ordered, it’ll most likely be based on a new mystery with a fresh batch of characters, with Kristen Bell and Michael Ealy being the only cast members to return for season 2.

Dare Me season 2: Renewed Or Canceled?