Who Is Hitman Holla’s Girlfriend, Cinnamon In 2022? 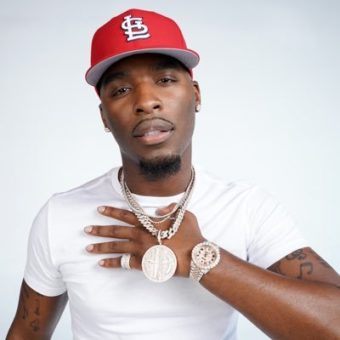 Hitman Holla is an American battle rapper, actor, and former professional athlete who is well known for battling in the SMACK/URL rap circuit and recurring cast member from Season 6 to Season 16 of MTV’s Wild ‘N Out and return to the show in Season 18 on VH1, MTV2, and MTV.

Hitman Holla is a St. Louis native who decided to make a career in battle rapping after college. Hitman began battling in 2008, going up against RemyD and quickly establishing a reputation on the battle rap circuit. He became recognized for ending each bout with one of three phrases: “ball game,” “yett yett,” or both, as well as his aggressive delivery and use of techniques like remixing his bars.

He was formerly a member of SMACK/URL, as well as Battle American Fight Klub. Hitman announced that he had been banned from the URL due to his threats to knockout Norbes. In Season 6, Hitman became the second battle rapper after Conceited to join Wild ‘N Out, becoming the first battle rapper to do so. Who Is Hitman Holla’s Girlfriend, Cinnamon In 2022?

In October 2017, he released his song “Diddy Dum Dum” featuring Jeff with a music video. She Ball, directed and co-written by Nick Cannon, is an independent film Hitman just completed filming. In 2021, he became a recurring cast member on the BET sports drama, Games People Play.

Cinnamon is a 27-year-old influencer and entrepreneur with a bio on Instagram that claims she runs her own online store, CINNY. She’s also the owner of Cinny’s Food, which is a culinary business. In 2016, Cinnamon began dating Hitman Holla, and she frequently shares photos of herself and her partner together with her 277,000 Instagram followers.

What Happened To Cinnamon?

In October 2021, four robbers broke into the home while Cinnamon was FaceTiming Hitman Holla. When his girlfriend was shot, the rapper stated that he was away on business. After a bullet passed through her cheek and exited the back of her head, according to Hitman, Cinnamon was rushed to hospital.

Imagine being on FaceTime while you’re out of town and your girlfriend is telling you that there are people in the house at 1 a.m., so she needs coaching a thousand miles away. She showed fortitude by shooting back at her attackers.”

Read Also: Who Is The Wife Of Omari Hardwick, Jennifer Pfautch?

How Is Cinnamon Doing?

“I really do appreciate each and every one of you guys so much. I could never thank you enough. I never knew I was this strong until now! “Thank you to my amazing support system because I honestly wouldn’t know what to do in a time like this. “I’ve never been so afraid in my life man, but I was covered by the blood of Jesus!”

On Instagram, she has photos of herself with a neck brace, indicating that she is recuperating from the gunshot injury. On December 5, Cinnamon posted a photo of her in Cancun, Mexico on a boat. Her note read , “Life tried to crush me, but I’m still living and LYFE is great.”

Hitman Holla, whose real name is Gerald Fulton Jr., went viral on Twitter on December 15 after he reportedly sent a sex video to his close friends. The video of the couple having intercourse was leaked online and one person questioned why the video was posted.

“Why tha hell would @HitmanHollapost those videos and how’d they still get leaked from his close friends,” one person asked. However, another person on Twitter defended Hitman Holla, saying he must have been hacked.

On Twitter, Hitman Holla responded to the leaked video and wrote, “Would never disrespect my woman and post something she didn’t agree to or didn’t like…but jokes on me okay cool I’ll be fine lol.” He went on to claim that Cinnamon knew the people he was sending the video to and gave permission for everything he sent his pals.

“She green light anything I post like let’s not act dumb,” he said. “Somebody screen recorded my close friends November 5th that’s I posted them videos. “Not tripping I knew the risk,” his post says, adding, “That works in me and Cinnamon relationship might not work for y’all and that’s ok but what y’all do w/yall partner nun of my business but understand ima do me enjoy y’all day.” Twitter removed the video saying it violates their policies.