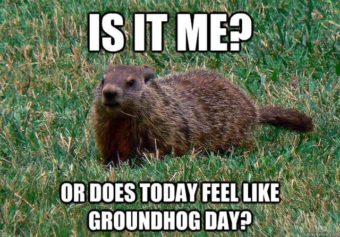 February 2 is the Groundhog Day, which means it’s time to find out if there will be another six weeks of winter or whether spring is coming early. The annual celebration observed in North America and Canada on February 2 has origins in a Pennsylvania Dutch superstition. According to folklore, if the groundhog emerging from its hole sees its shadow due to clear weather and retreats to its shelter, we will endure six more weeks of winter.

If he does not detect his shadow, however, spring will come soon. On the first of February, people flood Punxsutawney in western Pennsylvania for The Groundhog Day celebration, which is centered around a semi-mythical groundhog named Punxsutawney Phil. However, if you can’t make it to the event in person, you may still rejoice with these hilarious Twitter memes.

I’m hoping Punxsutawney Phil pops up and tells us all to get our sh*t together on climate change. #ClimateCrisis #GroundhogDay

Feb 1st 1992 – Weatherman Phil Conners tells viewers that he won’t be in the studio for the 10 o’clock weather tomorrow, as he’ll be in Punxsutawney for #GroundhogDay

I’m not superstitious, but I am a little stitious about what this means for 2022. #GroundhogDay

GroundhogDay is coming but I did my own research.

“Once a year, the eyes of the nation turned to this tiny hamlet in Western Pennsylvania to watch a master at work. The Master? Punxsutawney Phil, the world’s most famous weatherman. The groundhog…”

Tomorrow would be a great day to #ArrestTrump because then we could replay the day over & over until the arrest is perfect.

I see Sky Comedy have their traditional 2nd February line up. #groundhogday

Happy #GroundhogDay to the ravine squatters who eat our mulberries every summer.

We’re almost there! Tomorrow is the big day and the excitement is palpable! Happy Groundhog Day Eve everybody! #groundhogdayeve #groundhogday2022 #groundhogday