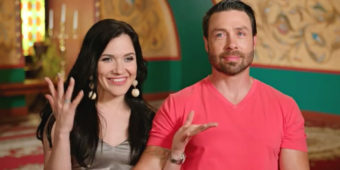 The reality star faces a sentence between 12 and 20 years in prison without the possibility of parole.

A former 90 Day Fiancé star has been convicted of kidnapping and assaulting his fiancée.

Prosecutors had alleged that sheriff’s deputies responded to a call of a domestic disturbance on June 9, 2019, at Paschel’s home. When they arrived, his now ex-fiancée told officers that Paschel had assaulted her.

“Paschel grabbed the victim by the neck and slammed her head against the wall several times. She was also thrown to the ground and dragged,” the D.A.’s office said in the statement.

He also took her phone and wouldn’t let her leave the residence. She said was able to flee to a neighbor’s house while he slept, authorities said.

While responding to the incident, officers noticed she had a large bruise on her forehead, as well as several bruises and cuts on her back, arms, and the inside of her lip. She was also diagnosed with a concussion, according to the D.A.’s office.

During the trial, Paschel claimed that his ex-fiancée’s injuries were self-inflicted.

Paschel’s aggravated kidnapping conviction is a class B felony. Due to his criminal history, he faces a sentence of between 12 and 20 years in prison without the possibility of parole, the D.A.’s office said Friday.

His prior convictions include possession with intent to sell a controlled substance, as well as two federal drug trafficking charges.

Paschel is scheduled for sentencing on Dec. 3.

How tall is Geoffrey Paschel? He stands tall with a height of 5 feet and 8 inches and weighs about 73 kilos. He is a fitness freak as well. He has blonde hair and has light brown eyes.

Paschel starred on season four of 90 Day Fiancé: Before the 90 Days which followed his relationship with Varya Malina, whom he got engaged to during the show’s filming. This was after the assault on his other ex-fiancée.

During his season, some TLC fans called for his removal from the series “due to current allegations and criminal charges made against him.”

Days later, Paschel issued a statement to Instagram addressing his reasons for appearing on the reality show despite his “checkered past.”

“I have been repeatedly asked why I would EVER want to be on a show (the best show FYI) where my life would be put in front of everyone to pick apart—especially with my checkered past,” he began. “Well, guys, it is MY past. It is MY life. It is MY choice. If we were all the same: thought the same, looked the same, or acted the same, how lame would that be?”

If you are experiencing domestic violence, call the National Domestic Violence Hotline at 1-800-799-7233, or go to thehotline.org. All calls are toll-free and confidential. The hotline is available 24/7 in more than 170 languages.