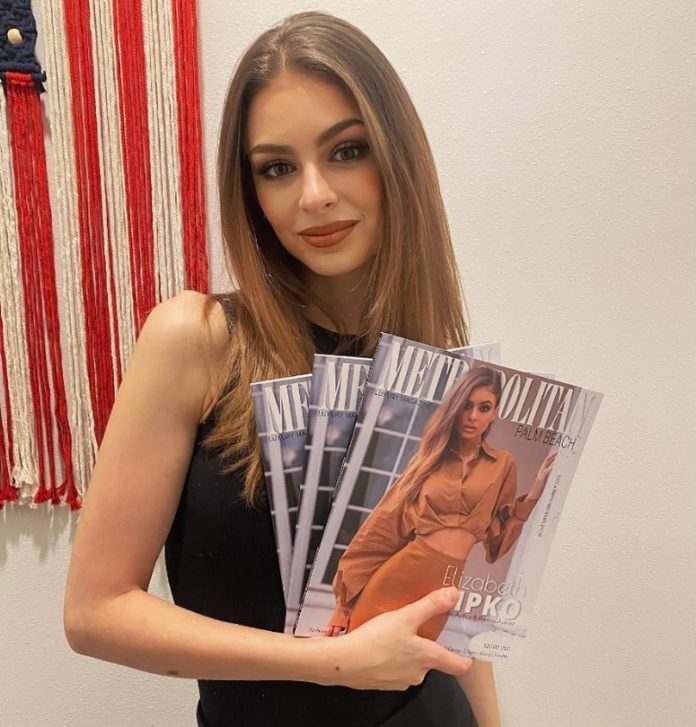 Elizabeth Pipko is an American writer, model, and political operative. She is most well-known for establishing the Exodus Movement, a movement calling on American Jews to leave the Democratic Party. She’s also credited with writing Sweet Sixteen and About You.

Elizabeth Pipko is an American author and model and founder of the Exodus Movement. At age 17, Pipko’s first book Sweet Sixteen was published by Archway Publishing, a self-publishing service from Simon and Schuster.

Model Elizabeth Pipko wants Ukrainians to know she is among the Americans rooting for their refuge amid the crisis of the Russia invasion.

Pipko, 26, who has long been outspoken about her patriotism, says the Russia-Ukraine crisis is a reminder that the people of the United States are “rooting and praying” for Ukrainians.

“We know that they don’t deserve what is happening to them and hope, and pray, that they can be courageous, but also remain safe during this time,” Pipko told Fox News Digital in an interview. The founder of The Exodus Movement and author shared her personal connection to the conflict overseas.

“I am a first-generation American, with my entire family being from the former Soviet Union, so I have a very strong connection to everything that is going on right now. My family members come from all over the region, Russia, Estonia, Belarus and Ukraine. Much of what makes me who I am came from that region of the world,” Pipko shared.

Despite living thousands of miles away from the crisis, the New York native reminded us why all Americans should remain vigilant amid this devastating moment in history.

Her second book, a collection of poems, was published with the same publisher in June 2018 under the title About You and received acclaim from Thrive Global. Pipko was a speaker on the “Social Media Stars as Authors” panel at BookExpo America in NYC in October 2018.

Her mother, a former model and designer of the brand, began selling vintage copies of Vogue after Elizabeth’s birth. She was discovered when she entered her school’s modeling contest at 15 years old.

At 17, she was signed to Wihemina Models and has appeared in DT magazine, Maxim, and Esquire.

She became part of the “Perfectly Imperfect” campaign for Vizcaya Swimwear, an anti-photoshop movement that sought to promote healthy body image by several publications including People and Vanity Fair. Elizabeth Pipko has also graced the cover of Supermodels SA and L’officiel Baltics in June 2018.

Elizabeth Pipko is an American author and model and founder of the Exodus Movement. She was born on June 26. 1955 in New York, New York, the United States, As of 2022, Pipko is 27 years old.

They met while she was working for the Donald J. Trump for President Campaign headquarters. She has not revealed her father, mother and siblings details in public. The information is under review and will be updated soon.

At the time, Darren was working on the re-election campaign for U.S. President Donald Trump. They got married on the 26th of December 2018 in West Palm Beach in Florida at the Mar-A-Lago Club.

At the time, Centinello was working on the re-election campaign for U.S. President Donald Trump. She worked on Trump’s 2016 campaign for president.

Pipko is the daughter of the granddaughter of Soviet-born American Artist, Marc Klionsky. She has not revealed her estimated net worth as of 2022. The details are under review and will be updated soon.

Pipko began modeling at the age of 17 when she was signed to Wihemina Models. She’s been seen in Maxim, DT, Esquire, and L’Officiel, and she’s frequently likened to Emily Ratajkowski early in her career.

In 2018, she starred in Vizcaya Swimwear’s “Perfectly Imperfect” campaign, which promoted a positive body image despite Photoshop manipulation.

Pipko claims that her political activism and viewpoints are what have derailed her career, but she did appear in a QP spread this year.

When asked what it meant to her to be modelling again, she responded, “This is about demonstrating to young women that they can achieve anything they desire.”

From modelling to politics and everything in between, there’s no limit for them.