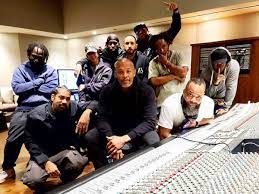 90s and 00s hip hop icons Dr Dre, Snoop Dogg, Mary J Blige, Eminem, and Kendrick Lamar dominated the Super Bowl halftime show with their biggest hits on Sunday evening (13 February 2022). It began with an extended welcome, during which a group of Lamars emerged from the crowd to perform his song Alright. The term Dre Day sparked confusion among fans as one after another, Lamar emerged from a sea of backup dancers standing in cardboard boxes labeled Dre Day and ignited controversy over what it meant.

The legendary artists of Dr. Dre and his apprentices came together on stage for the Super Bowl LVI halftime show, which was undoubtedly meant to celebrate West Coast hip hop. Mary J.

Blige and 50-Cent sang together for the first time in 15 years, with Mary J. Blige co-headlining and 50-Cent making a surprise cameo with his music In Da Club during the 15-minute stage. He also came into the arena upside down, a reference to his music video.

The camera then shifted to an aerial shot of a group of cardboard boxes, with Kendrick Lamar in the middle, as Mary J Blige collapsed on the stage after her performance.

The squad of bleach-blonde backup dancers donned black suits and sashes with the words Dre Day embroidered on them, as they danced in unison to m.A.A.d city before erupting into his 2015 song, Alright, from To Pimp A Butterfly.

Aside from Lamar’s performance, you may have noticed that each tweet about the halftime show included the word “tweeple.”

Fans have been using the term “Dre Day” to refer to it since the shows are paying tribute to Dre’s legacy in hip-hop and R&B. Dr. Dre is a rapper, record producer, and former member of N.W.A who is best recognized for founding Aftermath Entertainment and Death Row Records, as well as being a pioneer in the rap genre.

He served as the executive producer for albums by Snoop Dogg, Eminem, Kendrick Lamar, 2Pac, and R&B artist Anderson.

Paak, who also appeared as Eminem’s drummer during the halftime performance. The line-up was so stacked because they all have connections to Dr. Dre and are paying tribute to his influence in the field.

The song is also the title of his 1993 collaboration with Snoop, in which he shot at Eazy-E over money issues.

However, since Dre was still under contract with Eazy-E at the time, the latter benefited financially from The Chronic album, which has been labeled by Billboard as “the greatest hip-hop albums of all time.”