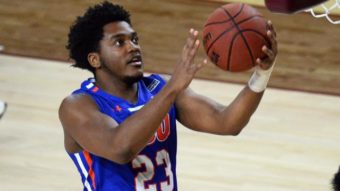 At approximately 12:36 a.m., the New York Police Department received reports of gunfire in Manhattan’s East 139th St. and Fifth Ave. Injuries ranged from minor to critical, according to law enforcement officials. When cops arrived at the scene, they discovered nine people with gunshot wounds, two women and seven males.

All nine victims, ranging in age from 5 to 38, were airlifted by helicopter to area hospitals, where one of them, a 21-year-old male, was pronounced dead. According to the NYPD, the 21-year-old victim has been identified as Darius Lee. A weapon was recovered at the scene according to the NYPD; however, no one has yet been arrested in connection with the incident and investigations are continuing.

Who Was Darius Lee?

Darius Lee was from Harlem, New York, and played for Houston Baptist University where he was on track to graduate with his bachelor’s degree in December. He has been named HBU Robbie Robertson Male Student-Athlete of the Year for 2019.

“We are devastated. Darius was a remarkable young man who loved the Lord, his mom, his family, his teammates, his friends and his entire HBU family,” said Ron Cottrell, the James Sears Bryant Head Men’s Basketball Coach at HBU in a statement from the school.

He continued, “As great of a basketball player as he was, he was an even better person. I can’t even think of basketball right now. I can only think of what a light Darius was during his short time on earth. He was a joy to coach and we loved him so much.”

The shooting was “unfortunately, yet again,” according to the university’s director of athletics Steve Moniaci, “yet another example of the senseless gun violence that seems to be plaguing our country right now and we all hope it will stop.”