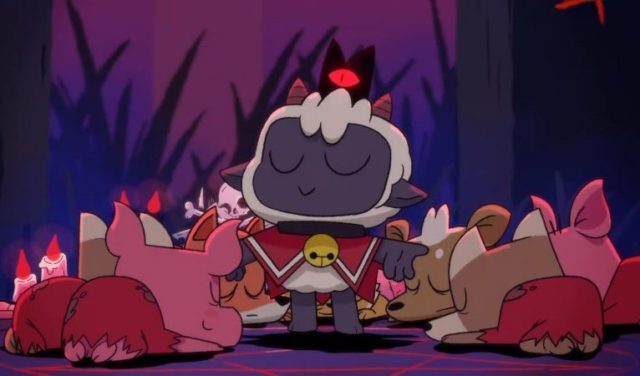 Cult of the Lamb casts players in the role of a possessed lamb saved from annihilation by an ominous stranger, and must repay their debt by building a loyal following in his name. Start your own cult in a land of false prophets, venturing out into diverse and mysterious regions to build a loyal community of woodland worshippers and spread your Word to become the one true cult.

“Cult Of The Lamb” is a combination of strategy, action, and life simulation elements that creates a unique gaming experience. You are the title’s leader lamb and must build the titular cult to honor the stranger who saved your life. You will need to explore a random map to find resources and build structures and “perform dark rituals” to inspire your followers.

Cult Of The Lamb Game Explained

Collect and use resources to build new structures, perform dark rituals to appease the gods, and give sermons to reinforce the faith of your flock.

Explore a sprawling, randomly generated world, fight off hordes of enemies and defeat rival cult leaders in order to absorb their power and assert your cult’s dominance.

Train your flock and embark on a quest to explore and discover the secrets of five mysterious regions. Cleanse the non-believers, spread enlightenment, and perform mystical rituals on the journey to become the mighty lamb god.

Cult Of The Lamb Release Date, Trailer, And Gameplay – What We Know So Far

Devolver Digital is known for publishing games that are not conventionally published. The action-adventure simulator “Cult Of the Lamb” is not an exception.

YouTube user “Cult Of The Lamb” described its premise as “Let’s worship the Dark Gods with cute little fluffys,” before calling it “the game that I didn’t know was necessary.” The project combines elements of “Don’t Starve”, “Enter the Gungeon” and “Don’t Starve,” offering all the charm you could want in woodland creatures wrapped in wicked packaging.

You play the role of a lamb in “Cult Of The Lamb”, where you narrowly avoid death through the miraculous intervention of a mysterious benefactor. This favor seems to come with tentacles — in order to survive, you will need to recruit other animals to worship your otherworldly Savior, while also gathering resources and purging rival religious organizations. The world of domination has never been so cute.

Are you ready to mix the cute and the occult? This is what you need to know regarding “Cult Of The Lamb.”

When will Cult of the Lamb release?

Lamb” at Gamescom this year, it appears you don’t need to wait too long to get to enjoy the diabolical action-adventure. It will be released sometime in 2022. Although the publisher did not reveal the platforms on which the title would launch, its Steam listing suggests that you will be able to get it for PC.

Massive Monster is a three-person independent development studio that has just launched “Cult of the Lamb”, their latest project. After starting in flash games, the group moved to desktop and console development. S. This could mean that “Cult Of The Lamb” will be available for consoles as well, although Armor Games Studios (not Devolver Digital) published Massive Monster’s previous titles.

Is there a trailer for Cult of the Lamb?

Massive Monster and Devolver Digital shared an official trailer for “Cult of Lamb”, which was released on August 25. The clip is a mix of gameplay and animated sequences. It introduces the project’s unique premise and shows the types of mechanics and encounters that gamers can expect.

The first moments of the film show the execution of the main character by a cult and their subsequent resurrection by a dubious-looking being in chains. The lamb returns to the realms of the living and produces a sword before setting fire to their captors, before releasing the other prisoners. All of these adorable woodland animals immediately bow to their savior and take in all the attention.

After the lamb’s impressive comeback, the video transitions to a montage of scenes that illustrate the player’s core objectives. The rest of the trailer focuses on gameplay, delivering an intriguing lineup of cute and devilish imagery.