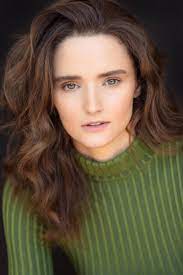 Christie Burke is a Canadian actress who is best known for her portrayal of Renesmee Cullen in The Twilight Saga: Breaking Dawn – Part 2. She began acting at a young age, appearing in local theatre productions and short films before landing her first major role as Renesmee in 2011.

Since then, she has gone on to appear in over a dozen feature films and television shows. She is passionate about her craft and continues to challenge herself with new roles and projects. Some of her famous films in which she appears are, The Twilight Saga: Breaking Dawn – Part 1, Best Day Ever: Aiden Kessler 1994-2011, Crowsnest, The Twilight Saga: Breaking Dawn – Part 2, A Single Shot, True Love Waits, Black Fly, Love Everlasting, Still/Born, Ascension and many more.

Who Is Christie Burke?

Christie Burke was born on October 20, 1989 in Canada. She is 33 years old, as of 2023. She holds Canadian nationality and belongs to mixed ethnicity. In 2007, she graduated from New Westminster Secondary School.

Christie Burke As Lt. Sharon Garnet In ‘The Ark’

How Much Is The Net Worth Of Christie Burke?