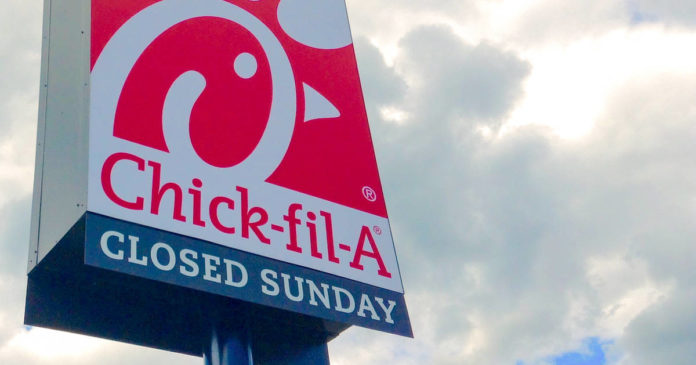 Despite the fact that more than 750 million people visit Chick-fil-A restaurants every year, a number of them continue to ask why the fast food chain is closed one day a week. “Why does Chick-fil-A close on Sundays?” someone asked recently. Many more fans are now taking their hunger to Twitter as today is May 1, which is a Sunday.

The answer is actually quite simple and has remained the same since the very first Chick-fil-A opened in 1946. The chain’s founder, S. Truett Cathy, made the decision to close on Sundays because of his personal religious beliefs. As a devout Southern Baptist, Cathy believed that Sunday should be reserved for worship and spending time with family. He famously said, “Even if it means going without one day’s business, we feel it is more important to honor God.”

Cathy’s son and current Chick-fil-A CEO Dan T. Cathy has continued to uphold his father’s tradition of keeping the restaurant closed on Sundays. In a 2012 interview with USA Today, he explained, “It’s been a part of our heritage and tradition, and we want to continue that. We don’t want to lose sight of what made us successful in the first place. It’s a business model that has worked very well for us over the years, and we are not going to be deterred from keeping it intact. I think it’s part of our brand promise. This is just something that sets apart how we do business.”

Despite some people’s criticism of Chick-fil-A being closed on Sundays, most customers understand and respect the chain’s decision to honor their founder’s religious beliefs by closing their doors one day each week. Still, many of them can’t help but crave Chick-fil-A on Sundays! Why Chick-fil-A Close on Sunday: History Explained.

“Chick-fil-A closed on Sunday to give its employees the opportunity to unwind with their families and friends before getting back to work on Monday,” the company’s official Twitter account stated in early July.

On its website, Chick-fil-A offered a somewhat different explanation: “When our founder, Truett Cathy, opened his first restaurant in Hapeville, Georgia in 1946, he made the decision to close on Sundays.

Having worked seven days a week in restaurants that were open 24 hours a day, Truett saw the importance of closing on Sundays so that he and his employees could set aside one day to rest and worship if they wanted—a practice we continue today.” The chain’s founder wrote that closing on Sundays “is our way of honoring God.”

Chick-fil-A began the tradition of closing on Sunday as a religious symbol, according to Truett’s book Eat Mor Chikin: Inspire More People. “Closing our business on Sunday, the Lord’s Day, is our way of honoring God and expressing our devotion to Him,” Truett wrote in 2002.

“My brother Ben and I opened our first restaurant on the first Sunday after we opened in 1946, and my children have promised to close our restaurants on Sundays long after I’m gone. Because of our loyalty, God seems to grant us unexpected chances to do greater work for Him,” he continued.

Chick-fil-A faced boycott levels of controversy because of the Cathy family’s religious beliefs, especially after Dan Cathy, one of Truett’s sons, stated in a 2012 radio interview that supporting same-sex marriage would bring God’s judgment to our nation.” According to The Washington Post, at the time , the business has also incited anger by donating to anti-LGBTQ organizations.

Chick-fil-A has $10 billion in yearly sales