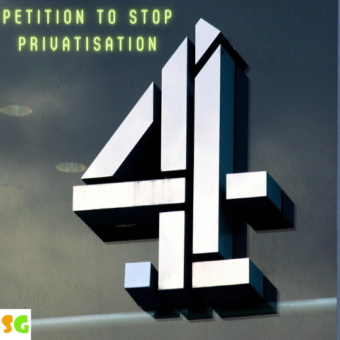 The British government has announced intentions to privatize Channel 4. Established in 1982 as a fourth television service in addition to BBC 1, BBC 2, and ITV, the popular television station was designed to give viewers with another option besides BBC 1, BBC 2, and ITV. In 2022, Channel 4 will host some of the UK’s most well-known series including Goolebox, The Great British Bake Off , and Naked Attraction.

A government source claims that the sale is intended “to enable C4 to grow and develop so it may thrive and flourish long into the future, supporting not just the UK creative industries, but also other sectors across the country.” However, the public’s response to the plan has been negative, and thousands have signed a petition attempting to stop the planned privatization. Petition to stop privatisation of Channel 4 takes: Twitter.

Following the news on Monday (April 4th), a Change.org petition has amassed over 9,000 signatures demanding that the government reconsider its decision to privatize Channel 4. E.L. McNally is the person who created the petition for Prime Minister Boris Johnson, in which they express their displeasure with the government’s plan to privatize Channel 4.“

“We are concerned that the government’s desire to commercialise Channel 4 would have a significant detrimental impact on programming targeted at all of this country’s diverse communities, both through time and across generations,” they added.

The petition went on to state that the government has “no right” to “advance a plan that is against the interests of the viewing public,” and it added: “I hope we can all band together to safeguard Channel 4’s independence.” It concluded by stating, “Channel 4 is an important component of British media.”

The petition has already garnered over 38,000 signatures of its goal of 50,000 as I write this and the number is rapidly rising. Many people are sharing the Change.org petition on Twitter and asking others to sign it, with one person writing: “Erosion of media freedom is, as we see around the world, a dangerous step towards autocracy. Channel 4 must maintain editorial independence. Please sign and forward it on.”

“Normally I think online petitions have no bite, but you have to sign them anyway. Boris Johnson: Stop the privatisation of Channel 4 – Sign the Petition!” said another.

“Channel 4 is a sparkling gem in our outstanding broadcast portfolio,” reads the petition. “Privatization will be the death knell of its creativity and fierce independence.” Others, on the other hand, believe that while the Change.org petition is wonderful, an official government request must be created for ministers to acknowledge it.

Everything We Know About The Privatisation

The Queen’s State Opening of Parliament Speech is scheduled to include details of the Channel 4 sale on May 10th 2022. We don’t know much about the future transaction yet, but Nadine Dorris said that the anticipated £1 billion will be used to “level up” the creative industry.

“Channel 4 rightly holds a cherished place in British life and I want that to remain the case. I have come to the conclusion that government ownership is holding Channel 4 back from competing against streaming giants like Netflix and Amazon,” she said.

The Culture Minister added: “A change of ownership will give Channel 4 the tools and freedom to flourish and thrive as a public service broadcaster long into the future.”

“I will seek to reinvest the proceeds of the sale into levelling up the creative sector, putting money into independent production and creative skills in priority parts of the country – delivering a creative dividend for all,” the 64-year-old concluded.