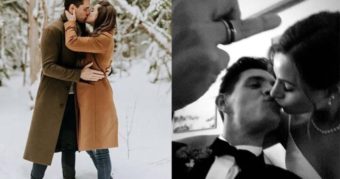 Casey Cott, of the TV show “Riverdale,” married his girlfriend! After the ceremony, actor Casey Cott shared wedding images with his wife, Nichola Basara, on Instagram.

Casey’s wedding was a reunion of sorts, with most of the cast members in attendance. In fact, some people went on social media to post photos from the event. Meanwhile, on Instagram, Casey uploaded numerous photographs.

What We Know About Nichola Basara?

Nichola, on the other hand, is a little more private than Case. She does not appear to be as active on social networking as Casey is. Her Instagram now has over 600 followers and remains profitable since she has avoided it. Despite the fact that Nichola hardly shares parts of her life, Casey does not hesitate to include stunning photographs with her. On December 19, the pair confirmed their engagement when Casey posted a photograph on his social media page.

Who All Attended The Event?

The marriage was attended by several Riverdale cast members. Vanessa Morgan, KJ Apa, Lili Reinhart, Camila Mendes, Madeleine Petsch, and Charles Melton were all in attendance at the wedding. One of the cast members, for example, posted a selfie on Instagram. In fact, during an interview with US Weekly, Casey described how each member of the ensemble had a distinct function to play.

He said: “They’ve been asked. They’re aware of their responsibilities coming up. … Luckily, we kind of planned a lot in the very beginning, and now we’re into the details, which is fun and exciting and stressful. But we’re having a blast. We are in full-blown planning mode. We may or may not be doing our food tasting this week.”

Who Is Nicole Pantenburg, Babyface Wife?

Were The Pair Planning To Postpone Their Wedding?

The couple has been engaged for two years, according to People magazine. They were planning a small wedding, according to the source.

“My family is in America, so her family is in Canada,” he added. So we’re hoping the border [situation] works out and everyone can attend; my brother Corey will marry us, which is great. So we’re really happy that he’ll be very active in it. We’e always close with our siblings and figured he’d be a good fit for the job. He’s always aware of his position when he’s casted him before. So, we decided to cast him.’ Fortunately, the couple was able to have a fantastic wedding with their family surrounding them.