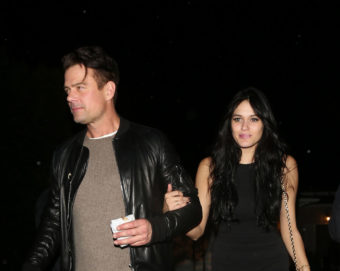 The actor is looking to have a love-filled New Year, as he announces his engagement to former beauty queen Audra Mari.

With Josh and Audra in the limelight, you may be interested to learn more about the pair. Let’s look at how they met and their age gap.

On January 8, 2022, Josh Duhamel revealed to his 2 million+ fans on Instagram that he had finally popped the question. “It’s happening!! She found a message in a bottle that washed up and said YES!!” he captioned the photo.

To propose to his future wife, actor/singer Austin Duhamel went on a romantic and secluded beach with this message in a bottle proposal. The note read, “Audra Diane Mari, will you marry me?”

The pair were first seen together in May 2019, indicating they’ve been together for over two years. They confirmed their relationship five months after that. A source reportedly told ET that Josh and Audra had met through “mutual friends.”

Debunked: Did Halle Berry get married to Van Hunt?

Who is Audra Diane Mari?

Josh Duhamel may be known by you from films such as Transformers or ABC’s soap All My Children, but his soon-to-be wife Audra has a very successful career as a beauty queen. In 2016, Audra was chosen Miss World America and went on to compete for the United States at the 2016 Miss World pageant.

Audra is a 19-year-old beauty queen from North Dakota who has previously attended the Miss Teen USA and Miss Universe pageants. Audra was runner-up in both events. Apart from her pageant experience, Audra also works as a model. In recent months, she’s made steps to pursue a television career by producing Backroads, a video series.

Since the engagement of Audra Mari and Josh Duhamel was announced, their age difference has been a topic of conversation.

Audra was born on January 8, 1994, in Fargo, North Dakota. On her 28th birthday, Josh surprised Audra with the proposal. Joshua is nearly twice her age, as he is now 49 years old. He was born on November 14, 1972, in Minot, North Dakota.